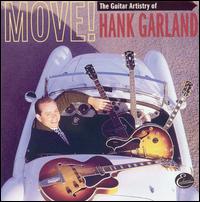 Actually, Nashville jazz is not an oxymoron, as “Nashville’s Jazz Roots” a brief but useful article by PJ (Paul) Broome and Clay Tucker in the June issue of the IAJRC Journal illustrates. It features a photo of Hank Garland playing with Karl Garvin’s Nashville-based big band in 1952, well before the jazz sessions I was familiar with, like After the Riot at Newport on RCA, and his own Columbia sessions from the early 1960's.

Evidently, Garland is the subject of an upcoming Hollywood film: Crazy. One has to assume the producers are hoping to draw on the success of Walk the Line with another bio-picture of a dramatic Nashville life. Since I don’t see Waylon Payne and Ali Larter as a sure-fire tent-pole cast, it wouldn’t be too surprising if Crazy made an inauspicious cable debut (though Garland’s story certainly deserves a nice theatrical run). Regardless, one has to hope they don’t just focus on his work backing the likes of Patsy Cline and Elvis Presley. Garland would want to hear some real jazz in the soundtrack too.
Posted by J.B. at 9:47 AM