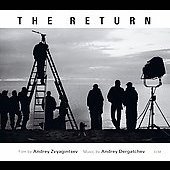 ECM founder Manfred Eicher has co-directed the film Holozän, and produced the music for several others, including the Academy Award winning Journey of Hope, so it is logical his label would become a leader in the soundtrack genre, in addition to jazz and classical. Andrey Dergatchev’s soundtrack for Andrey Zvyagintsev’s The Return, certainly fits the aesthetic standard Eicher set for ECM.

Dergatchev’s music defies easy classification, crossing genres to meet the demands of the on-screen action. Moody and austere, Dergatchev’s music reinforces the emotional isolation of The Return’s characters, particularly on a track like “Piano,” where the title instrument stands out in lonely contrast to the synthesized background. The mood of alienation is also captured on tracks like “The Road” and “Port” which blend location sounds with electronic music, in effect, making the everyday sound otherworldly.

The Title music might be the most accessible. “Titles—Run” synthesizing techno beats with plaintive Eastern sounding melodies, both tracks inspire a trance-like effect, that some DJ is bound to flip over. “Final Titles” echoes “Run,” with the synthesizers up more in the mix, reflecting the film’s theme of return, with the closing music referring back to the opening title theme.

At times, The Return brings to mind the more minimalist “Filmworks” music of John Zorn. It is a spare, but compelling aural landscape. At times it is fragmentary, incorporating the sounds of nature or the human voice, as in the chanting on “Old Man.”

The Return has been compared to the films of Andrei Tarkovsky. The contemplative and mysterious qualities of Dergatchev’s soundtrack lend credence to such analogies. Hearing it without having seen the film leaves one intrigued rather confused, as it expresses the film’s emotional undercurrents clear as a day. It is a fascinating listen.
Posted by J.B. at 6:17 PM