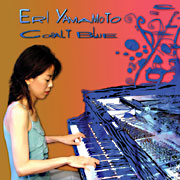 According to her biography, Eri Yamamoto was a classical piano prodigy in Japan, but discovered jazz during a 1995 trip to America, where she heard Tommy Flanagan through happenstance. From that background, she has developed a distinctive jazz style, which makes Cobalt Blue an exciting listening experience.

At times Yamamoto’s playing shows that classical influence in her rhapsodic solos. There is also quite a bit of McCoy Tyner in her talent for gradually increasing the intensity through a tune, controlling it, and letting it subside when she wishes. One can definitely hear this “Takeda No Komoriuta,” her adaptation of a Japanese folk song, and the knockout title track. “Cobalt Blue” is particularly dramatic for its slow build that finally develops into a pulsating vamp.

Indeed, Yamamoto has a muscular, percussive attack—particularly evident on the frenetically caffeinated “Hot Coffee.” Yet, she can also give a crystalline interpretation of Cole Porter’s “I Love You,” which also features a fine bass solo from David Ambrosio. With Ikuo Takeuchi on drums, the trio interplay is superb throughout Cobalt. The other standard, “They Can’t Take That Away From Me,” is played as an up-tempo groover, an unusual choice that really works.

Yamamoto’s compositions are intriguing, like the subtle melody of the moody “Irving Place.” Yamamoto’s ability to use space is also impressive. She even lets Ambrosio’s bass carry the lead voice on “A Little Nap.” Her tunes, like “Cobalt Blue” evolve and unfold, with surprising twists and turns, which make Cobalt a richly textured listening experience.

The hardest reviews to write are those of new artists readers probably haven’t heard of, performing a number of originals people probably will not recognize, because one can't assume many common points of reference. In Yamamoto’s case, I have to just say: trust me, this is a good one. The way she recasts the two standards here is really refreshing, and it would be fascinating to hear her adapt more songs like “Takeda No Komoriuta.” As a composer, she brings to mind the elliptical work of Andrew Hill. This is an excellent CD from a very talented musician
Posted by J.B. at 2:03 PM