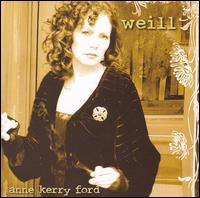 Kurt Weill’s reputation is intertwined with that of his early collaborator Bertolt Brecht, but while Brecht was politicizing his lyrics, Weill was more interested in the art of his melodies. Anne Kerry Ford’s new set of Kurt Weill songs, simply titled Weill, provides a fresh look at the composer, including examples of his collaborations with a variety of different lyricists, including Ira Gershwin, Maxwell Anderson, and Langston Hughes.

Ford is a vocalist more in the cabaret tradition, also known for an acting career on the soap opera Days of Our Lives and in the films Clean and Sober and Fearless. For many of the songs here, particularly those with Brecht lyrics, like the demanding "Pirate Jenny," her theatrical training is helpful in interpreting dramatic and sometimes thorny lyrics.

Ford clearly takes inspiration performing in Weill’s native Germany backed up by the German WDR Big Band, one of the best bands in Europe. The great jazz pianist Roger Kellaway wrote most of the arrangements, giving a jazz feel to some of the tunes. This is particularly strong on “One Life to Lead” with lyrics by Gershwin, which even features some scattish vocalizing over William Artope’s trumpet.

“My Ship,” also from Lady in the Dark, Weill’s Broadway collaboration with Gershwin and Moss Hart, is a beautiful ballad feature for Ford with simple but elegant piano accompaniment from John Boswell. It is also interesting to hear Ford singing the alienation and blues of Hughes’ “Lonely House” and effectively rising to the concluding emotional crescendo.

Indeed, Ford has a strong voice that is never overwhelmed by the orchestra on tunes like the opener “I’m a Stranger Here Myself.” Ford handles the lowdown brass voicings of Kellaway’s arrangement, as well as Odgen Nash’s suggestive lyrics quite well on another standout tune that would be of strong interest to jazz listeners.

Evidently, Kurt Weill is set for another Broadway revival. LoveMusik a musical directed by Harold Prince, dramatizing Weill’s relationship with Lotte Lenya and featuring his songs, is scheduled to debut soon. Those Broadway patrons would certainly also enjoy Ford’s Weill. It is clearly an independently conceived self-contained project, which straddles cabaret and big band vocals in a way that could appeal to a wide theater-going audience. The result is a well-selected set of Weill songs (no “Mack the Knife”—too obvious) that showcases Ford’s voice and gives a deeper appreciation for the breadth of Weill’s compositions for musical theater.
Posted by J.B. at 6:44 AM