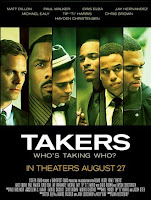 Even in this ever-deepening recession, business is booming for five Angelinos. They are up-scale bank robbers. If they only steal TARP money, would the twice-appropriated funds still count as larceny? It would remain an act of taking, which is very definitely the name of the game in John Luessenhop’s Takers (trailer here), which opens today nationwide.

As the film kicks off, the fab five are putting in a good day’s work. Located high in an L.A. skyscraper, this bank ought to be a daunting assignment, but it is a walk in the park for our masked gunmen. It is a nifty action prologue, tightly choreographed, featuring an ingenious plan shrewdly incorporating the cluelessness of the news media. That bank never had a chance. However, just as they are about to celebrate, things get a little strained.

Enter “Ghost,” a former accomplice who was pinched on one of their rare unsuccessful gigs. Though he never rolled over on the old gang, everyone is a tad on edge to see him again, particularly Jake Attica, who is now engaged to Ghost’s ex. After laying down a vaguely menacing guilt trip, Ghost makes his proposition: a rush job hitting an armored car. He just happens to have next week’s route through his contacts with the Russian mob (gee, you don’t think that might be significant later, do you?). Against their better judgment, the team ramps up for the big score. Further complicating matters, cop-on-the edge Jack Welles is slowly closing in on them. Then stuff starts to blow up and people shoot at each other.

Takers is beyond slick. There are more shots of the setting sun glinting off L.A.’s soaring glass skyline than in the entire series run of L.A. Law. There is also plenty of over-the-top posturing and sneering passing between Ghost and his rival. Yet, the film deserves credit for some crowd-pleasingly amped-up stunt sequences, including a Parkour-style pursuit that looks like it was inspired by the District 13 films.

As the leader of the crew, the towering, strictly business Idris Elba is all kinds of bad. Likewise, Hayden “Anakin” Christensen is a surprisingly cool screen presence as A.J., the technical mastermind who also plays a bit of jazz piano (Hoagy Carmichael's "The Nearness of You"). (Again, Takers is further evidence Lucas cannot direct anyone out of a paper sack.) R&B star Chris Brown (of Rihanna notoriety) is convincingly immature as the younger Attica brother, while displaying some real action movie cred in the cranked-up-to-eleven chase scene. It even delivers

a suitably serpentine villain played with smooth-talking verve by Tip “T.I.” Harris (the rapper who named himself after his favorite calculator).

In truth, Takers inspires hearty chuckles nearly every step of the way. Sometimes it is intentional, more often times not. Still, an hour and forty-five minutes of solid laughter with some impressive stunt work tossed in is certainly entertainment of a sort. It also looks great recycling every heist cliché under the sun thanks to the uber-glossy cinematography of Michael Barrett. Trashy fun, Takers opens wide today.
Posted by J.B. at 4:00 AM