The tough guy returning from a long prison stretch is a gangster movie staple. However, Enzo’s homecoming to the northern port city of Genoa is nothing like the film noir genre, though it is certainly gritty at times. For one thing, Enzo’s woman has waited for him faithfully. Furthermore, she is not really a she. Yet, GLBT themes are only tangentially relevant to Pietro Marcello’s impressionistic docu-hybrid La Bocca Del Lupo (or The Mouth of the Wolf, trailer here), which screens this Saturday as part of Rooftop Film’s 2011 Summer Season.

Even the red light districts and crumbling back alleys of Genoa are picturesque. Frankly, it appears to be the city crime-ridden Naples ought to be. There is definitely a seedy underbelly, which Marcello captures at street level. He also shows viewers the hardscrabble fishermen as well as the rough-and-tumble dock workers. Life is hard in Genoa, but so are the people, particularly Enzo, the Sicilian transplant.

A low level thug, Enzo spent his life in and out of prison. It was there that he met Mary while she was doing time for her heroin habit. It is hard to imagine an odder couple, but somehow they remained true, regularly sending audio tapes through the mail in which they lovingly refer to each other as “bastards.” Enzo final stint was the longest. Essentially emerging a senior citizen, his future prospects are not promising.

While ostensibly a love story, Lupo is more closely akin to experimental filmmaking. Serving as his own cinematographer, Marcello has a keen eye for color and composition. He makes the hidden Genoa look rich and mysterious. As Enzo (presumably himself), Vincenzo Motta is definitely quite photogenic as well, in a craggy character actor kind of way. Envision Dennis Farina after going a few rounds with Tyson and you will have a good idea of his mug. Indeed, he is a compelling figure, even in Marcello’s formless narrative. 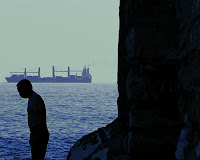 Clearly, Lupo is deeply nostalgic, but for what is not exactly clear. The gangster life just isn’t what it used to be, evidently. There is no question Lupo is for an adventurous, self-selecting audience. However, Marcello’s strangely intriguing images and the assured manner with which he marries them to music will fascinate students of experimental film. Recommended to those who think in terms of cinema as a form of essay, Lupo screens with a short film and a musical act this Saturday (8/6) under the auspices of Rooftop Film at the Old American Can Factory in Brooklyn.
Posted by J.B. at 5:30 AM