Not the Partridge Family: Janie Jones

No matter what 1970’s television told us, a tour bus is no place for a thirteen year old girl. Unfortunately, young Miss Jones does not have a better option when she is abandoned by her junkie mother. The sensitive protagonist will have a hard time adapting to life on the road while getting to know the rocker father she only just met in David M. Rosenthal’s Janie Jones (trailer here), which opens this Friday in New York.

The Ethan Brand Experience is not what it used to be, but the eponymous front man can still draw a decent crowd at seedier clubs. He is rather enjoying his blue light special tour, until Mary Ann Jones visits him backstage. A former groupie Brand cannot even remember, Jones has some heavy news for Brand: congratulations, you’re a father.

Naturally, the self-centered Brand wants nothing to do with either of the Joneses, but he has no choice when the single mother deserts her daughter in the club. Of course, Miss Jones can also play the guitar. Obviously, these two are meant to play some serious father-daughter acoustic sets together, but Brand will have to work through some considerable self-destructive behavior first.

Indeed, these are not the Von Trapps anymore than they are the Patridges. To his credit, Rosenthal paints a sometimes withering portrait of a compulsively irresponsible man. Brand just is not cute anymore, nor is he supposed to be.

Brand might well be the part Alessandro Nivola has been waiting for. In the past, he has provided a jolt of energy to middling films like Turning Green and somehow pulling off parts he has been miscast in, such as the overall entertaining Who Do You Love. However, Nivola has the perfect look and sensibility for the aging rocker, fully committing to his drunken rages and angst-ridden self-pity. He totally sells Brand’s sweeping arc of character development and even holds up his end in the musical numbers.

In contrast, Abigail Breslin often looks like a deer caught in the headlights, but frankly that is not inappropriate to the film’s dramatic context. Though her voice is comparatively thin, she is still admirably game in her own musical scenes. Yet, it is Peter Stormare who steals the occasional spotlight as Brand’s long-suffering good old boy manager, Sloan. Veteran TV actor David Lee Smith also scores a brief but very memorable scene explaining what’s what to Brand as Officer Dickerson.

Rosenthal vividly captures the disconnected vibe of life on tour and effectively incorporates the singer-songwriter music of Gemma Hayes and Eef Barzelay’s rock into the film. You could probably convince people it is a Cameron Crowe film, which Rosenthal should consider a high compliment. 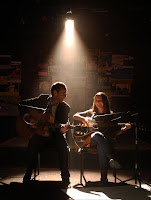 Despite the uncomfortable emotional honesty of the first two acts, JJ wraps itself up way too neatly, with a big feel good smile. It revisits some familiar, well-worn cinematic ground, but does so with admirable earnestness. Better than one might expect, if not a genre-redefining rock drama, JJ opens this Friday (10/28) in New York at the Village East.
Posted by J.B. at 7:00 AM