Canada’s Next Generation: The Art of Speech 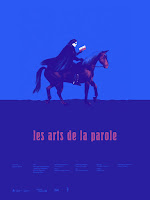 A little post-modernism can be a dangerous thing. Here it is wielded like a club. Ironically, the protagonist, Koroviev would be well-equipped to crack down on such abuses, as the instructor in Quebecois poetry for Montreal’s newly instituted poetic-police. His interest in New Left cultural figure Pierre Maheu causes unforeseen complications in Olivier Godin’s The Art of Speech (trailer here), which starts streaming this Thursday on MUBI, as part of their series, Canada’s Next Generation.

Koroviev wears an eye-patch, drinks coffee, and refuses to sit down—ever—because of the potential damage it might cause his pancreas. His boss, Margerie (a.k.a. “The Singing Policeman”) has recently come out of a coma and is already back on the job. Koroviev’s latest assignment is surveilling Clement, a hipster of interest.

He was supposed to just watch Clement in next Margerie’s door office, through a hole in the wall. However, he quickly just invites himself over when he learns his subject has a connection to Maheu. Apparently, Clement owns a country bungalow where Maheu was lived. It is now inhabited by the sister of Coriandre, a platonic friend of Clement. Koroviev will be quite taken with her when he seeks her out. His boss Margerie also enjoys calling to serenade her late at night.

Tonally, Speech feels very odd, because it tries to marry goofy whimsy with knowing postmodern gamesmanship. The upshot is viewers are constantly taken out of the story by both low-end humor and high-end deconstructive mischief-making. There is literally something to irritate and confuse everyone in this film.

Nevertheless, there are several scenes that are quite clever when considered in isolation. Yet, the best aspect of the film is the soundtrack, featuring licensed music by Steve Lacy and solo performances by actor-musician Adam Kinner. In both cases, we are talking about the avant-garde at its most accessible: the unadorned tenor and soprano saxophone, raw and plaintive and ever so expressive.

With his eye-patch and dark suits, Michael Yaroshevsky is certainly cinematic-looking as Koroviev. As his namesake, Adam Kinner is only seen performing on-stage, but he sounds great. Frankly, Michel Faubert’s Margerie quickly starts to annoy the rest of us just as much as he does to Koroviev, but Jennyfer Desbiens is strangely haunting as Coriandre. At first, Etienne Pilon’s Clement merely seems like another nauseating hipster, but he takes an indescribably weird turn in the third act that he largely sells. It is like a riff on Shakespearean comedy, but more contemporary and random.

By now you should have a very good idea whether Speech is your cup of tea, unless you are a Steve Lacy fan with conventional tastes in all other respects. This film sounds terrific, but it is too cute for its own good. Offering more frustrations than rewards, The Art of Speech is really only meant for the post-structuralist elect when it premieres this Thursday (8/16) on MUBI.
Posted by J.B. at 6:00 AM