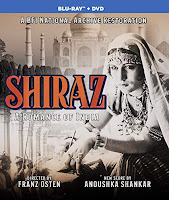 When it comes to tragic epics, this one has all the elements. You have a foundling, a noble woman raised as a commoner, and most importantly, a love triangle. However, this is not Shakespeare. It is one of the three great Indian silent films produced by the collaboration of actor-producer Himansu Rai and expatriate German director Franz Osten. Restored to its full striking glory by the BFI, Osten’s Shiraz: A Romance of India is a visual feast for cineastes when it releases today on DVD/BluRay.

Selima was born a princess, but when the caravan taking her family north is ambushed by raiders, the abandoned girl is lucky to be adopted by a common tradesman. Initially, their son Shiraz considers her a sister, but overtime he develops an all-encompassing love for her. Unfortunately, just as Shiraz starts to get serious, Selima is kidnapped by slave traders. Shiraz follows them tenaciously, but he is powerless to intervene when she is auctioned at the slave market.

All is lost for Shiraz, but perhaps not Selima, since she is purchased by an agent of the Moghal court. In fact, Selima and Prince Khurram start to take a shine to each other, but he cannot pursue his feelings for her, because of class restrictions. Of course, that does not stop Dalia, an ambitious social-climbing noble, from growing increasingly jealous of Selima. When she notices Shiraz moping outside the palace, she starts scheming.

There is no question Shiraz is pure 100% melodrama, but it is epic in scale. The sets are big, the locations are sweepingly cinematic, and the cast of extras are worthy of Cecil B. DeMille. The clarity of the restoration makes the film really pop off the screen. Yet, what makes this edition of Shiraz so accessible is the propulsively rhythmic original score composed by Anoushka Shankar (Ravi Shankar’s daughter and Norah Jones’ half-sister).

It is amazing how a contemporary soundtrack can “open up” a classic silent film. Although Shankar is working within a classical Indian framework, her music still has a very modern sensibility. In fact, some sections are quite jazzy and it all has a killer groove. Shankar’s sitar is hypnotic, but contributions from jazz-world hybrid artists like Idris Raham on clarinet and Danny Keane on piano and cello really give the music a lush, full bodied sound. 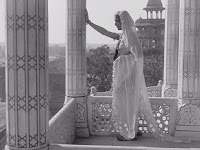 As for the on-screen business, Rai is a woefully sad-eyed as the tragic title character, but his performance still holds up pretty well by modern standards. Charu Roy certainly looks like a dashing prince, but for contemporary viewers, it is hard to understand why he is so popular with the people when he buys slaves who were kidnapped from their homes and has people executed via elephant trampling. Regardless, Enakshi Rama Rau is appropriately delicate and sensitive, like greenhouse orchid, as Selima.

Spoiler alert: Selima will eventually be known as Mumtaz Mahal, which means the film will take an architectural turn down the stretch—as in that Mahal. Cinematographers Emil Schunemann and Henry Harris really made the Taj and the Moghul palace sparkle. Thanks to the restoration and new score, it all looks great and sounds terrific. Very highly recommended for fans of silent cinema and contemporary classical-crossover Indian music, Shiraz: A Romance of India releases today (8/13) in a DVD/BluRay combo pack.
Posted by J.B. at 6:00 AM