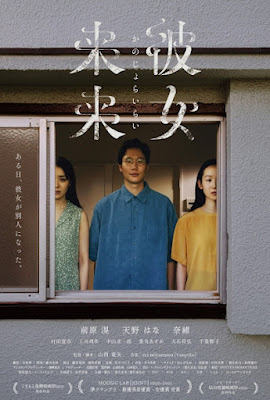 Norio’s rebound arrived suspiciously fast—like supernaturally so. He just found a new Mari in his flat, in place of his old Mari. Unlike Dick Sargent on Bewitched, he can tell she is not the same person, nor does she claim to be. Norio tries to figure out what-the-heck in Tatsuya Yamanishi’s Mari and Mari, which screens as an online selection of the 2021 Japan Cuts Festival of New JapaneseFilm, at the Japan Society.

For extra irony, Norio works for a casting agency. He thinks he lives happily with Mari Tanabe, his girlfriend of three years, who works at a bookstore. However, when he comes home one night, she is not there and nowhere to be found at her regular haunts. Then one night he comes home and finds Mari—the other Mari. She does not know why she is there, but she just feels compelled to be there.

First Norio freaks out and then slides into an angsty funk. He keeps throwing Mari II out and then letting her come back. Despite some fantastical elements, it is hard to figure just what Mari and Mari is. It is extraordinarily moody, but it lacks the mysteriousness of Richard Ayoade’s The Double. You can sometimes think of it a Vertigo without the suspense (and vertigo), but it is really more of a deadly serious spin on a Hong Sang-soo film like Yourself and Yours.

Kou Maehara is so sulky as Norio, he really gives the film a dour vibe. Nao is perfectly cast as the Mari Tanabe, the enigmatic and rather ethereal first Mari, who becomes the focus of Norio’s obsession. On the other hand, Hana Amano is so childlike as the second, available Mari, she cannot quite function as a proper analog.

Yamanishi deserves credit for developing a fresh spin on the doppelganger motif—a sort of non-doppelganger doppelganger. However, the film largely just hits the same dark note over and over. It is interesting in concept, but flat in execution. For the sake of equal time, it should be noted Mari and Mari was just awarded the festival’s Obayashi Prize. Interesting but too morose for its own good, Mari and Mari screens as an on-demand selection of this year’s Japan Cuts.
Posted by J.B. at 5:45 AM