The Musical Odyssey of Joe Jordan 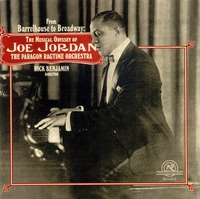 From Barrelhouse to Broadway: The Musical Odyssey of Joe Jordan
By the Paragon Ragtime Orchestra
New World Records

The list of Joe Jordan’s musical associates is long and distinctive: Will Marion Cook, James Reese Europe, Josephine Baker, and Clarence Williams. His song “Lovie Joe” made Fanny Brice a star. As an entrepreneur, he developed one of the first African-American office buildings in Chicago. Yet Jordan has largely been forgotten, likely due to the paucity of recordings under his own name. From Barrelhouse to Broadway is an excellent retrospective project recorded by the Paragon Ragtime Orchestra to give Jordan his due as an important American composer.

Jordan cut his teeth in the ragtime piano scene of St. Louis, mentored by no less a figure than Tom Turpin. Jordan’s early works, rags and syncopated waltzes, were very much a product of this environment, as witnessed by early compositions like “Double Fudge” and “Nappy Lee.” After relocating to Chicago, Jordan became a prolific composer for musical stage shows, often working with the great Will Marion Cook. One such collaboration “Sweetie Dear: An Afro-American” is a beautiful love song, performed in a light operatic style accurate to the period.

Although Jordan claimed to have never written the blues, his “The Whippoorwill Dance” and “The Morocco Blues,” performed as piano etudes by Rick Benjamin are beautiful highlights of the disc that carry at least an azure tint. “Whippoorwill” was composed for Jordan’s wife Irene, but never previously published or recorded, so its inclusion here is a real event. “Morocco” demonstrates Jordan’s adaptability as popular music was becoming more syncopated and jazz-like and also reflects the emerging “Spanish Tinge” in American syncopated music, as Jelly Roll Morton called it.

There are some historically significant songs collected here, including Brice’s “Lovie Joe” and “He’s Coming Back! Teddy Roosevelt’s Bull Moose Song,” a campaign song for the former president that exhorts: “Back to the White House from Oyster Bay … prosperity once more we will see because he’s coming back.” Evidently, Jordan was a lifelong Republican who was particularly fond of TR. According to the excellent liner notes, after retirement “Jordan spent the rest of his life in Tacoma, happily embroiled in Republican politics.” Jordan was also a patriot who enlisted in the Army at the outset of WWII, first leading military bands, then touring with the USO when forced to retire due to new age restrictions.

Clearly, the PRO and Benjamin are deeply steeped in the music of the Ragtime era, and perform as a well disciplined ensemble, one which Jordan would appreciate. Their instrumental interpretations of Jordan’s work and a rousing tribute to the composer and effectively recreate the milieu in which it was originally produced. Like his contemporary James Reese Europe, Jordan is a fascinating figure who lived an epic, even cinematic life. As Europe’s work has received fresh attention in recent years, hopefully this disc will encourage others to rediscover the music of Joe Jordan and other figures from the transitional period that bridged ragtime and early jazz.
Posted by J.B. at 7:01 AM