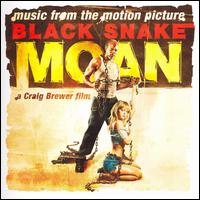 That’s some key art alright. Craig Brewer’s upcoming film appears to hit a lot of hot buttons, hard. However, as the story of a pious bluesman looking to reform a wayward woman, the sounds of the blues are central to the soundtrack of Black Snake Moan. The movie actually takes its title from a Blind Lemon Jefferson song, and yes, there was some double entendre there.

In many ways, the Black Snake soundtrack album concept brings to mind the Pulp Fiction OST, with snippets of dialogue included. Black Snake also goes back to the roots with two brief extracts of interviews with the legendary Son House, which really cut to the core of the blues.

Although much of the material here is licensed from other releases, some themes from Scott Bomar’s original score are included, performed by members of the North Mississippi All-Stars and harmonica virtuoso Charlie Musselwhite. Probably the best feature for Musselwhite is “The Chain,” which sounds both greasy and menacing (again, refer to cover art).

Also original to the CD are blues from lead actor Samuel L. Jackson. He is basically serviceable on “Just Like a Bird Without a Feather,” originally a R.L. Burnside tune, to whom the picture is dedicated. He is more convincing on the up-tempo juke rendition of Burnside’s Alice Mae,” but the real killer in the collection is his take on the mythic blues of “Stack-O-Lee” a.k.a. Stagger Lee. It is hard to imagine a song better suited to Jackson’s screen persona than the ballad of the stone cold killer of Billy Lyons. The combination of the driving guitar licks and Jackson’s delivery, more spoken than sung but loaded with attitude, could make this the party track of the year for those not offended by the MF’s and other assorted lyrics not Tipper Gore approved. The well sequenced disk follows this by going back to source with Burnside himself performing “Old Black Mattie.”

With tracks from Jessie Mae Hemphill, Precious Bryant, Bobby Rush, and the North Mississippi All-Stars included as well, Black Snake is nifty collection of Mississippi blues that makes with more than a nodding tribute to its historic roots. The film opens in a few weeks, so it will be interesting to see how it portrays the blues and handles its other themes. Regardless, the soundtrack CD holds up well independently of the film.
Posted by J.B. at 9:16 AM