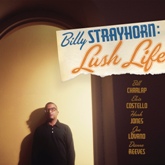 There must have been a blue moon last night, with WNET 13 actually showing jazz programming in primetime. Independent Lens’ Billy Strayhorn: Lush Life was broadcast on the New York PBS affiliate from 10:00 to 11:30 PM—still probably too late to introduce kids in school to a jazz great, but the first primetime showing for jazz on WNET in several years, none the less. (Call me a snob, but I just can’t count the Chris Botti special.)

This space has been critical of PBS and 13 for claiming to champion jazz during the broadcast of Ken Burns’ Jazz and the attendant pledge solicitations, but delivered precious little since. Terms like “bait and switch” may have been used here. So give credit to PBS and WNET for Lush Life last night.

It was a comprehensive and entertaining look at the artist so closely associated with Duke Ellington. While chronicling Strayhorn’s all too brief life, Lush Life frequently returned to the music itself. The filmmakers nicely blended archival footage with newly recorded tracks predominantly from Blue Note artists. Elvis Costello would probably be the marquee name performing, but the best matches of artist to material were Bill Charlap interpreting “Valse” and the great Hank Jones swinging his way through “China Doll.”

Obviously, Lush Life has been in the works for some time, given the original interview footage with the late Luther Henderson. It probably would have been helpful for viewers not obsessively familiar with things Ellingtonian to have some context for who the interview subjects were, but that’s a minor quibble. Overall, it was definitely worthy programming.
Posted by J.B. at 9:53 AM