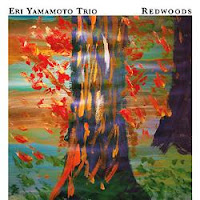 It is quite an accomplishment for a jazz artist these days to record on a legitimate label, be they even the smallest of independents, as opposed to essentially self-producing. To have two label releases within the span of about three months time is really getting someplace. That is the enviable position Eri Yamamoto is in, following up the early summer release of Duologue, with her new trio release, Redwoods.

Yamamoto has a regular Thursday, Friday, and Saturday night gig with her trio at Arthur’s Tavern in New York, when she is not touring (which she probably does at least one week out of the month). However, she seems to take inspiration from the road, frequently returning to home base with new compositions. Dropping by Arthur’s is a great way to hear her abundant new material taking shape.

Indeed, Redwoods had its genesis in the Muir Woods of Northern California. The title track is an elegant meditation on nature, featuring the sensitive brush work of Arthur’s stalwart Ikuo Takeuchi. Reverence for natural beauty is a theme for the session, also inspiring the stately but sensitive “Magnolia.”

The opening “This is an Apple,” referring to her initial English lessons (she is now picking up Italian too), nicely illustrates her talent for composing strong melodic hooks, as well as her mastery of dynamics though her powerful attack on the keys. It is followed by a spritely groover, “Wonder Land,” that nicely captures her strong rhythmic drive and sense of humor. It is the sort of tune jazz D.J.’s used to choose as their theme songs, back in the day when there were such creatures.

Of her now six CDs, Duologue is the first to break from the trio format, featuring two duo performances a piece with guest artists reedman Daniel Carter, percussionists Federico Ughi and Hamid Drake, as well as bassist William Parker, with whom Yamamoto has worked as a sideman. Starting with the beauty and graceful simplicity of “Thank You” and concluding with the wit and verve of “You are Welcome,” Duologue is a series of friendly, but eloquent conversations between the leader and her guests.

With the rock solid support of Parker, she brings a certain Monkish charm to “Subway Song,” whereas “Violet 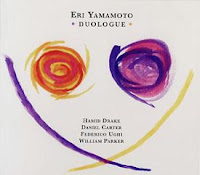 Street,” featuring Carter on tenor, is both simultaneously soothing and searching. Throughout Duologue Yamamoto takes us through a variety of moods, but the most dramatic might be the trance-inducing “Circular Motion,” featuring Drake’s gently hypnotic frame drum.

Both are thoroughly entertaining releases, but if you want to start with just one, Redwoods probably gets the nod, capturing the highly tuned empathy of Yamamoto’s working trio. There are plenty of talented jazz pianists in the City, but while they sound quite nice, I could never recognize them blindfolded. However, I am pretty confident I would know Eri Yamamoto’s playing by ear. She really has honed an individual sound all her own, which is why I have recommended her recordings here before, and do so again with Redwoods and Duologue.
Posted by J.B. at 3:24 AM