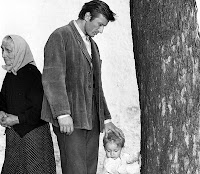 Rural Moravia offered its citizens plenty of hard work, but a proud life, until Soviet-style collectivization ruined their dignified existence. This phenomenon is dramatized unforgettably in Vojtech Jasny’s All My Good Countrymen, re-examined here less than a week after the DVD review, because it soon screens in New York as part of Anthology Film Archives’ upcoming Jasny retrospective.

Countrymen could only have been produced under Communist rule during the relatively free Prague Spring interlude. After the Soviet tanks rolled in, Countrymen was banned, consigned to a vault (although contraband prints did circulate). Yet, as Countymen opens, hope is in the air. The National Socialist occupiers are gone, though the Communists are growing in influence. Seven friends make music and general merriment together after a hard day’s work. However, Ocenás the church organist has assumed a leadership role on the local party council, whose actions will soon divide the once jovial friends.

Played by Vlastimil Brodský, a frequent Jasny collaborator also seen in Cassandra Cat, Ocenás is a surprisingly complex character. He alienates the village priest by leading the church choir in subversive hymns referencing such ungodly subjects as evolution and the Communist Party. However, his fellow party bosses are only too willing to sacrifice him for their own ends, leading to tragic unintended (but still useful) consequences.

In contrast, Frantisek, a successful farmer and pillar of the community, has no time for politics or ideological cant. He is a farmer in his soul, which he refuses to sell to the party. At one point he bluntly tells a local party boss: “You treat people like animals.” A taciturn man who leads by example, Frantisek is the archetypal strong, silent hero—the salt of the Earth, almost literally.

While in many ways a pastoral, Countrymen is identified with the Czech(oslovakian) New Wave, and it ofte 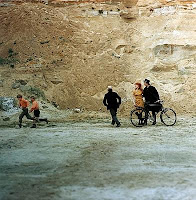 n shows a kinship with the Nouvelle Vague. Particularly striking are Jasny’s use of freeze frames during several death scenes. It even veers into disconcertingly surreal territory as the villagers cavort in exaggerated animals masks for an unspecified celebration that suggests subtle hints of danger.

Jasny addresses agricultural collectivization and its consequences directly and uncompromisingly. When viewing Countrymen, it is hard not to think he is probably lucky to be alive after 1968. However, Countrymen is never a simple indictment, portraying its characters with great nuance, most particularly the problematic Ocenás. When watching Countrymen, it is easy to see why the Communists banned it—it is simply a great film. It screens at AFA this coming Friday, Saturday, and Thursday, with Jasny himself in attendance for the first screening.
Posted by J.B. at 3:02 AM