What happens when America abandons her allies to certain military defeat and subsequent reprisals? Suddenly this is a timely question. Before making any rash withdrawals, the incoming administration should study past examples. One such case study occurred in Laos following America’s military exit from Southeast Asia. Its dramatic consequences for the Phrasavath family are documented in The Betrayal (trailer here), opening in New York this Friday.

Filmed over a twenty-three year period by director Ellen Kuras and her primary subject and credited co-director Thavisouk Phrasavath, Betrayal captures just about every trial and tribulation on film as it happens to the family. During the Viet Nam War, Phrasavath’s father was Royal Laotian officer working with American military advisors. Following the American departure and the Communist Pathet Lao conquest of Laos, the elder Phrasavath was arrested and sent to re-education camp, which was considered tantamount to a death sentence. Facing an uncertain future as the family of a declared enemy of the state, the Phrasavaths sought refuge in Thailand before eventually making their way to America.

The title could refer to any number of betrayals in the Phrasavath family’s story. It can certainly refer to the American government turning its back on an ally in the fight against Communist expansion, as well as the inhospitable welcome they received upon reaching this country. However, there are very personal betrayals within the family as well. For a time, Kuras’s co-director seemed to turn his back on family responsibilities, joining a gang and challenging his mother’s authority. The Phrasavath matriarch also wrestles with her own guilt, having left behind her two youngest daughters as a result of miscommunication in their haste to leave. However, the greatest personal betrayal comes following the film’s third act surprise.

Remarkably, either Kuras or Phrasavath happened to have a camera rolling as nearly every family crisis came to a head. However, the film is not so diligent filling in the gaps in-between. For instance, h 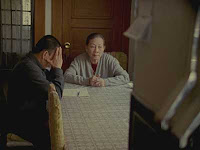 ow Phrasavath was able to return to Laos for the final scenes is never explained. He just seems to show up. Yet, for a shot-on-the-fly documentary Betrayal’s production values are quite high, even featuring a score composed by Howard Shore, known for his work on small films like Martin Scorsese’s The Departed and The Lord of the Rings trilogy.

The Betrayal is an American Documentary/POV co-production and frankly PBS is probably the right home for it. Most ticket buyers (outside of festival audiences) will likely find it better suited for PBS broadcast on POV or Frontline, than as a full-fledged theatrical feature. Still, Phrasavath has a dramatic story, and it would be great to see him get a book deal out of it all. It opens in New York on Friday at the IFC Film Center.
Posted by J.B. at 3:58 AM