Bookazine (Whatever That Is): No Depression 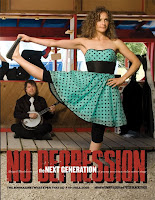 No Depression No. 76: The Next Generation
Grant Alden & Peter Blackstock ed.
University of Texas Bookazine (Whatever that is)

Print is dead, or at least so I’ve been told repeatedly as a publishing semi-professional. The magazine business has been particularly brutal over the last ten years or so. Some have tried to maintain a digital life after ceasing hardcopy publication, but it has usually just prolonged the death rattle (case in point: Omni magazine). While No Depression has pursued a similar internet strategy after shipping their final issue this summer, they have also recommitted to ink-on-paper, forming an alliance with the University Press of Texas to publish a twice yearly tradepaperback “bookazine (whatever that is).” With the first bookazine, No. 76: the Next Generation, now out, ND chose a theme of rejuvenation, focusing on youthful string bands currently reshaping the bluegrass scene.

Taking its name from an Uncle Tupelo album and the Carter Family song “No Depression in Heaven,” ND has covered all forms of music which fit under the umbrella of Americana, including: bluegrass, blues, ambitious country music, roots rock, and a smidgen of jazz. For the new incarnation, they made the editorial decision to relegate all live performance reviews to the website, but retained some CD reviews to preserve some of the feel of the original magazine. Indeed, most of No. 76 profiles the youthful string bands, which I am happy to note in a few cases includes artists well into their thirties.

It is cool to see ND find new life in as a bookazine, but as they grow accustomed to the new format, editorial adjustments will need to be made. Unlike the magazine form, the bookish trappings will encourage some readers to start at page one and proceed sequentially to page 144 (like your faithful reviewer). Unfortunately, many of the string band profiles follow the same template, explaining how each group is mindful of tradition, but incorporate a host of outside influences to synthesize their own unique sound, which is exemplified in their latest CD. To be fair, developing fresh hooks to discuss musicians is devilishly difficult (believe me, I empathize completely), but differentiating articles will be a greater concern now than in a proper magazine, which readers typically dip into sporadically.

That said, No. 76 is a thorough primer on the fresh faces on the string band scene. One name that recurs frequently though is no new-comer. As a member of Abigail Washburn & the Sparrow Quartet, Béla Fleck is described as: “regularly rated by many to be the most innovative living master banjoist who’s not Earl Scruggs.” (p. 80) His name reappears as an influence and producer for other artists, as well as art director for No. 76, having stage managed the eccentric photo shoot of Washburn and the Sparrow quartet, which graces the cover.

If bluegrass, no matter how reinvented, is not your thing, there is some welcome blues coverage in No. 76 as well. There are profiles of the truly youthful Homemade Jamz Blues Band and Gary Clark, Jr., the breakout star of John Sayles’s The Honeydripper. There is also a fairly lukewarm review of Two Men with the Blues, the collaboration between Willie Nelson and Wynton Marsalis. While praising some tunes, Rich Kienzle sums up the release writing: “it brings forth nothing new or revolutionary, nor was it meant to.” (p. 142)

It is great to see ND continue covering artists that magazines like Entertainment Weekly and Rolling Stone will not bother with, in any format. It also represents a potentially interesting publishing development, blurring formats as its artists blur genres. It should be interesting to follow as they calibrate their future contributions to fit the new format.
Posted by J.B. at 9:22 AM