Steve Wiest: Out of the New 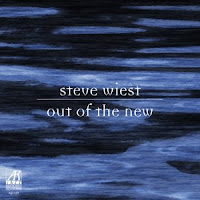 Out of the New
By Steve Wiest
Arabesque Jazz

Before Julliard or NYU, the University of North Texas became the first North American school to offer a jazz degree. (This is another friendly reminder that the jazz world does not end at the banks of the Hudson River.) UNT graduates have since filled the ranks of many big bands, including Maynard Ferguson’s. As a longtime Ferguson sideman, trombonist Steve Wiest followed the reverse course when he accepted his recent faculty appointment there. He quickly brought further prestige to the jazz department soon thereafter, when he was nominated for an instrumental arranging Grammy in recognition of his work on Ferguson’s final release. Following up his swinging and surprisingly literate big band outing Excalibur, Wiest now looks to contemporary popular music for inspiration with Out of the New, which radically reconstructs new standards by the likes of Coldplay, Green Day, and Foo Fighters.

Wiest culled much of his new repertoire from his daughter’s suggestions, but also looked to his favorite pop album, Sting’s Ten Summoner’s Tales. Sting, who has often employed jazz musicians as sidemen, seems to appeal to those inclined to the jazz aesthetic. However, Wiest’s arrangement is hardly slavish. He kicks up the tempo considerably, recasting it as easy-going swinger, allowing ample solo space for the leader, guitarist Fred Hamilton, and Stefan Karlsson on piano.

Probably the best known tune will cause the most listener trepidation. Indeed, Wiest tackled Aerosmith and Run D.M.C.’s “Walk This Way” as a deliberate challenge. Fortunately, Wiest recombines the song’s DNA so drastically it is almost unrecognizable (in the best sense). In many ways, it is a counter-intuitive tune, full of agitated, nervous energy, yet featuring a bowed bass solos. In a particularly clever arrangement, Wiest’s long solo coda shifts gears, bringing in the gutbucket blues.

Despite the common instrument, it would be a mistake to compare New to the many bachelor pad pop song interpretations recorded by bop trombonist Kai Winding in the late 1960’s. While the Winding LPs still hold a certain charm, the arrangements were largely confined to melody statements, with little room left for improvisation. They also usually attempted to recreate the general vibe of the original tune. New takes exactly the opposite approach. For instance, in Wiest’s hands, the slacker angst of Green Day’s “Wake Me Up When September Ends” becomes an elegant waltz vehicle for the leader’s muted horn.

The topper though is Wiest’s alchemy on the Foo Fighters’ “In Your Honor,” transmuting the post-Grunge anthem into a golden bossa. Hamilton and Karlsson sound audibly inspired by the leader’s arrangement, taking eloquent solos of their own, before the entire group comes in for the go-for-broke final coda that is the only point in New where Wiest faithfully recreates his original source material. Though only five musicians, for a little over a minute they thrillingly channel stadium rock through their instruments.

Wiest has a big sound on trombone and shows remarkable facility with the bop lines. His arrangements are consistently inventive, even surprising. Though based on pop tunes, Wiest never dumbs down the music of New—quite the contrary. Still, if fans of the originals give it a spin, they will be impressed, as will more experienced jazz ears.
Posted by J.B. at 6:15 AM