During times of depression people have to make do without a lot of luxuries. Should that include the checks and balances of representational democracy? It would seem William Randolph Hearst advocated as much in Gabriel Over the White House, his explicitly propagandistic foray into film production, directed by Gregory La Cava (better known for light comedies), which screens next week at the Film Forum, as part of their Breadlines & Champagne series of Depression-era films.

As Gabriel opens, the nation is mired in the depression, but the old boy network still reigns supreme. An unnamed party which seems to bear a passing resemblance to the GOP has installed one of its most genial and obedient members in the Oval Office. For staff, he has his governmental secretary, Hartley Beekman, and his “personal” secretary, Ms. Pendola Molloy. He calls them Beek and Pendy, insisting they call him Major. Until one day, a severe accident radically alters Hammond’s personality. While recuperating, the President is visited off-screen by the angel Gabriel, who evidently gives him a good talking to. Suddenly, it is strictly “Mr. President.”

Fed up with the fecklessness of his former colleagues, the new Hammond declares martial law, suspending Congress and instituting an economic plan not radically dissimilar to the New Deal. Waging war on domestic racketeers, Hammond prosecutes gangsters in military tribunals, holding the pre-determined executions in sight of the statue of liberty. As a result of his harsh policies, Hammond’s popularity soars. Gabriel is prescriptive, not cautionary.

Gabriel cannot be considered very effective propaganda, because neither side of the ideological spectrum wants to claim it as their own. One recent commentator tried to draw parallels between Gabriel’s President Judson Hammond and our President George W. Bush. However, given the documented editorial input Hearst granted FDR and the incoming president’s expressed admiration for the film, the left is stuck with Gabriel, like it or not.

Frankly, Roosevelt’s embrace of such an explicitly authoritarian (arguably dictatorial) view of the presidency seems more than a little strange in retrospect. However, he most likely had little use for the film later in his administration. After all, Hammond becomes an ardent proponent of disarmament. Using a display of America’s assumed superior military might as a veiled threat, the possessed president convinces foreign heads of state, including Germany and Italy, to beat their swords in to plough-shares. Of course, mere days before the film’s 1933 theatrical release, Germany passed the infamous Enabling Act, setting the stage for Hitler’s ascension to Fuhrer. That naïve pacifism would quickly date the film.

Although never banished to the vaults, Gabriel has never been widely viewed since its initial release. At one time available on VHS, it has yet to see life on DVD. To its credit, Walter Huston is perfe 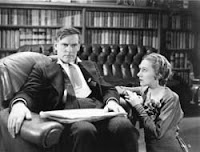 ctly cast as Hammond, but his single-minded intensity hardly seems desirable in a chief executive. As Beek and Pendy, Franchot Tone and Karen Morley are likeable enough fielding all the predictable questions about their boss, but the film itself never engages the audience on any level deeper than the political. It is more of an intellectual curiosity than an emotionally involving movie experience.

Gabriel is a product of its time. Though flawed (and a bit disturbing), it is a perfect selection for the Film Forum’s Depression retrospective. It screens appropriately (I guess) next Monday on Presidents Day. Look for more 1930’s films, including more escapist fare, as Breadlines & Champagne continues through March 5th.