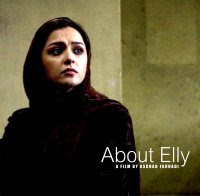 It is not easy being an Iranian filmmaker. Burdened with onerous Islamist restrictions, like the prohibition against showing physical contact between couples and the requirement women always be garbed in traditional head scarves, many directors have concentrated on stories told from a child’s perspective. Given such regulations, Asghar Farhadi’s latest film is particularly notable, portraying the interactions of two married couples and their friends on a disastrous beach holiday. Screening at this year’s Tribeca Film Festival, Farhadi’s About Elly, gives audiences a peak at the kind of cinema Iran has largely forgone.

When her husband’s friend Ahmad returns to Iran for a visit, Sepideh is determined to fix him up with her children’s school teacher, Elly during a holiday weekend. Though the reluctant Elly only agrees to stay for a night, Sepideh plays hardball as a matchmaker, hiding her purse to keep her at the beach house the next day. While threatening to walk home anyway, Elly is left to watch the children playing in the surf. Suddenly, the sea turns stormy, nearly washing away one of the children. After rescuing him, the vacationers realize Elly is missing. Was she lost to the ocean’s undertow or did she negligently slip away, leaving the children unattended?

At this point, the holiday turns decidedly ugly, as each action the group takes seems to only make matters worse. Sepideh and her friends come to realize how little they really know about Elly when faced with the grim prospect of notifying her family. In fact, they do not even know her full name. What they start to discover radically alters their perception of the possibly late school teacher, and is quite revealing of Iranian attitudes towards women in general.

For the record, the head scarves stay on throughout the film, even when Sepideh dives into the water in search of Elly. However, there is some physical contact between the sexes, but it is hardly romantic. Blaming her manipulations for the tragic turn of events, Sepideh’s husband begins beating her until he is restrained by another woman.

Farhadi creates a tense, uncomfortable atmosphere that is completely believable, while his cast projects an unaffected naturalness that heightens the film’s realism. Despite some substantial cultural differences, Elly is a logically constructed cautionary tale of good intentions gone seriously wrong. A cold, compelling film, it hints at the kind of cinema we might see if Iranian filmmakers had greater freedom to depict more intimate drama. It screens at Tribeca on April 26th, 27th, 29th and May 2nd.
Posted by J.B. at 3:30 AM