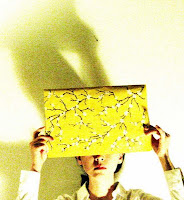 For years the Japanese government denied responsibility for holding an estimated 200,000 women captive as sex slaves for their military during World War II. Suffering from shame as well as physical and mental trauma, it would take years for the surviving “comfort women” (also referred to as “wianbu”) to speak out. One such survivor finds her voice to bear witness in Haerry Kim’s Face, part of the terraNOVA Collective’s soloNOVA festival of solo performances running at the DR 2 Theatre throughout the month of May.

Based on published first-person testimonies, writer-performer Kim structures Face as a memory play, told years after the fact by a survivor now in her eighties, but still haunted by the wartime atrocities she endured. As a young girl, life was a struggle in occupied Korea. After the death of her father, she drops out of school to help her mother eke out a subsistence living in the fields. Yet, she still yearns for a better life, which makes her susceptible to a cruel Japanese bait-and-switch. She signs-on to work in a Japanese factory by day, lured by the promise of school at night. What follows is a harrowing story of rape, torture, disease, and mental anguish in the euphemistically named “comfort stations.”

Kim is truly heartrending in Face, conveying the shattering death of a young girl’s innocence and the hard-earned resolve of woman in her twilight years. Kim transforms herself into her character at vastly different ages, without the aid of make-up, simply through her uncannily expressive countenance. By their nature, solo performance requires the considerable courage to take the stage alone, without back-up. However, Kim seems particularly exposed on-stage, bringing to life her character’s unspeakable sufferings.

Even though Kim does all the talking (save for her best friend Sunja briefly heard in recorded voice-overs), Face never feels stagey. Jakyung Seo’s dramatic lighting effectively emphasizes the stark, m

inimal nature of the well-mounted production. A compellingly written work, Face should also open some eyes in the audience, not only to the tragic story of the “comfort women,” but also the severe cultural policies of the Imperial occupation, which required Koreans to adopt Japanese names and prohibited their native language.

Face is a viscerally intense theater experience, featuring an exceptional performance by its writer. It might be sad and infuriating, but Kim also finds a measure of inspiration in her character’s resilience. Highly recommended even to those not ordinarily enamored with one-person shows, Face transcends its format. It runs through May 23rd as part of soloNOVA.
Posted by J.B. at 3:45 AM