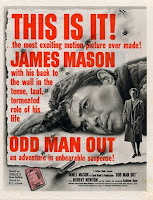 In 1953, Carol Reed became only the second British film director to be knighted for his artistic accomplishments. Fifteen years later he would win an Academy Award for Oliver!, the kind of safe, middlebrow film Oscar voters love, but film buffs despise. However, Reed can easily be forgiven his musical foray, having directed three true masterpieces of British Film Noir: The Third Man (1949), The Fallen Idol (1948), and Odd Man Out (1947), the first and perhaps moodiest of the trio. Despite its largely sympathetic portrayal of an IRA protagonist, it helped cement James Mason’s status as one of the United Kingdom’s biggest stars. Now in honor of Mason’s centennial, Film Forum presents Reed’s Odd in a new 35mm print, as part of its Brit Noir and Mason Most Noir repertory film series, beginning this Friday.

Johnny McQueen believes fervently in the IRA cause. Unfortunately, his time in prison took a toll on him, physically and mentally. However, he is still determined to go on their next heist job as planned, rather than send another man in his place. Everyone fears for the worst, most of all Kathleen Sullivan, whose affections McQueen is too much the martyr to recognize.

Of course, things go terribly wrong. During their getaway, McQueen kills a man and is gravely wounded himself. Separated from his comrades, he desperately seeks shelter, while a massive dragnet proceeds to scoop up the crew, one by one.

Somehow Reed and screenwriters F.L. Green and R.C. Sherriff were able to produce a film based on Green’s novel about the Troubles of Northern Ireland that never mentions Catholics, Protestants, or the British. Instead, they create a noir world, where many people profess to support McQueen and his cause, but nobody wants to get involved. Essentially, Odd chronicles McQueen’s death rattle, as he teeters through the streets of what is presumably Belfast, while the police and Sullivan scramble to find him first.

Mason is indeed compelling as the tragic anti-hero, who seems doomed from the first frame, yet does his best to

meet his fate with stoic resolve. While most of the cast are relatively unknown to American audiences, William Hartnell, the first Doctor Who, appears as Fencie the barkeeper. Still, the entire cast is quite convincing, having been largely recruited from the Abbey Theatre of Dublin, including co-founder W.G. Wray, as the well-meaning but pragmatic Father Tom.

Odd is one of Reed’s three great films and certainly a highpoint in Mason’s filmography as well. While American audiences might identify Mason more with British prestige pictures, the Film Forum retrospective lovingly presents him in a more nefarious light. Odd runs for two weeks, beginning this Friday (9/4-9/17).
Posted by J.B. at 6:45 AM