As Seen Through These Eyes

The same talents that eventually lead to work in the Warner Brothers and MGM animation studios literally saved Dina Gottliebova Babbit’s life in Auschwitz. The sadistic Dr. Mengele spared the nineteen year-old girl so she could serve as his personal artist, painting portraits for the Nazis guards and documenting his cruel experiments. For many young Jewish and Roma artists, maintaining their creative voices during the Holocaust was a means of spiritual and sometimes even physical survival, and their work now serves as solemn testimony to the crimes of the National Socialists in Hilary Helstein’s documentary As Seen Through These Eyes (trailer here), which opens this Friday in New York.

Babbit and her mother came to Auschwitz via Theresienstadt, a temporary camp dressed up like a benevolent Potemkin village to successfully fool guileless Red Cross inspectors in an episode that will forever shame the organization. As part of the Nazi ruse, prisoners were actually encouraged to participate in artistic endeavors, before their eventual deportation to the death camps. Of course, children like Ela Weissberger were also part of the elaborate illusion. Now a resident of New York State, she was one of only two cast members of Brundibar, a children’s opera produced and filmed for propaganda purposes, to survive.

Laudably, Eyes does not ignore the frequently overlooked Roma Holocaust. In fact, Helstein clearly tries to unite the Jewish and Roma experiences by presenting Babbit as the film’s touchstone figure. Bizarrely obsessed with the Roma people, Mengele initially forced Babbit into his service in order to better capture their skin tones through her paint brushes than was possible (in his judgment) with photography. She made a point of painting one young Roma girl, in hopes of saving (or at least prolonging) her life. Years later, Eyes shows her emotional meeting with Karl Stojka, a Roma artist who survived Auschwitz as Mengele’s errand boy, who did indeed know her short-lived friend.

The thoughtfully selected art displayed in Eyes runs the gamut from Babbit’s sensitively rendered portraiture to the grimly surreal. Some is the work of obviously accomplished fine artists, w 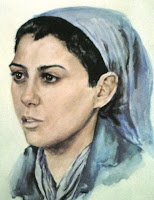 hile other pieces have the blunt power of so-called outsider art. Further heightening the poignancy, the soundtrack features contributions from harmonica player and survivor Henry Rosmarin, who was spared thanks to his ability to play Schubert on his instrument.

Eyes is a respectful film that deserves credit for recording the stories of both Jewish and Roma artists. However, much of the material covered in Eyes might be familiar to some from other somewhat recent documentaries (such as Clarke and Sender’s Prisoner of Paradise about the Theresienstadt camp; Alexandra Isles’s Porraimos specifically documenting the Roma-Sinti Holocaust; and Berge, Newnham, and Cohen’s Rape of Europa, a truly outstanding film that illuminates the strange National Socialist preoccupation with art). Still, most viewers will find Eyes quite informative and at times genuinely moving. It opens Friday (10/2) at the Cinema Village.
Posted by J.B. at 3:15 AM