As the former French consul in Shanghai and a devout Catholic, it is easy to understand how the anti-Western, anti-Catholic Boxer Rebellion might horrify playwright Paul Claudel. However, it was a less than epic event from his own life—namely an illicit affair—that inspired his drama of rootless French expatriates advancing towards their ill-fate in turn-of-the-century China. Yet, as is often the case in his work, the worldly take on hidden, cosmic import in Noon Divide, the final production of the Storm Theatre and Blackfriars Repertory Theatre’s Paul Claudel Project, now running at the Church of Notre Dame.

The entire notion of love, in any context, is highly problematic in Divide. Mesa, an unremarkable French civil servant, has given up on it completely, renouncing his kinship with his fellow man. For the flirtatious Ysé, it is a dangerous, but effective tool. On the proverbial slow boat to China (for the even more proverbial forty days), Mesa resents her attentions, while hating himself for the feelings they stir. There is definitely something percolating between them, catching the attention of the rakish Almaric, but escaping the notice of her easily manipulated husband De Ciz. Claudel though, is more interested in Mesa’s attempts at abnegation than consummation, finding more drama inherent in the former.

As befitting a Zhivago-like romantic saga, the fate all three men will become intertwined with Ysé as the Boxer Rebellion inexorably boils over. Nevertheless, Claudel almost entirely shuns the macro picture, using the Boxers solely as background noise. Instead, his focus is more intimate and infinitely wider. It is a tricky duality that directors Stephen Logan Day and Peter Dobbins pull off quite nicely.

Granted, Claudel’s dramatic instincts might sound counter-intuitive, but he certainly could write. One is immediately struck by the richness of his language and the effectiveness of the French translation of Divide. His dialogue is heavy with significance, but it never sounds awkward or affected. In fact, it is often quite sharp—witty, even. 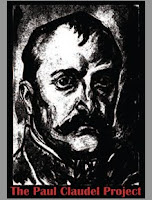 Claudel’s words are probably not a little daunting, but the four-handed cast proves quite game. Projecting a malevolent magnetism, Chris Kipiniak is particularly gripping as Almaric. Co-director Dobbins also conveys all the contradictions and uncertainties of Mesa, while still coming across as acutely human.

A deep and challenging production, Divide is a strong conclusion to the Claudel Project. Frankly, it leaves one wondering why Claudel’s work has been so rarely revived. While he addresses faith in sophisticated and uncompromising terms that might not attract the materialistic or shallow, his plays offer much for directors to sink their teeth into. Divide is a case in point. Highly recommended, it plays at the Church of Notre Dame through November 20th.
Posted by J.B. at 9:15 AM