In the first episode, Peepshow Pioneers, viewers will learn the Michener-like early history of the nickelodeon and so-called magic lantern shows. However, we also meet the men who saw the commercial potential of moving pictures, including the legendary inventor Thomas Edison. In fact, the final scene Edison Studios’ best known film, The Great Train Robbery remains one of the indelible images of cinema history.

As M&M continues with The Birth of Hollywood, the recognizable names of Louis B. Mayer, Samuel Goldwyn, Carl Laemmle, and Jack Warner begin to emerge as serious industry players. In addition to a number of film historians and Robert Osborne, the well-respected face of TCM, the series features personal reflections from surviving relatives of nearly every mogul. Perhaps the most insightful commentary comes from Samuel Goldwyn, Jr., a film producer in his own right, who explains how his father literally put up the family house as collateral for every film he produced after being ousted from MGM, the studio that still bears his name.

Series writer-producer Jon Wilkman shoehorns a great deal of Hollywood history into each episode without sacrificing watchability to a parade of names and dates. In a sharp contrast to recent history, M&M clearly documents how both the moguls and their stars embraced the war effort in the 1940’s. Yet perhaps the most intriguing segment involves the aptly named William Bioff, a mobbed-up union leader, who shook down the moguls for some substantial protection money. On the other hand, its treatment of the HUAC hearings is a rather simplistic, Hollywoodized treatment that completely ignores the post-Cold War revelations regarding the nature of the CPUSA. Indeed, M&M never plumbs any Hollywood controversy too deeply, preferring to keep its march through history brisk and snappy.

To a degree, M&M reinforces the stereotype of the early Hollywood moguls as gruff, cigar-chomping businessmen, who were more interested in profits than highfalutin notions of art. Of course, those preconceptions are not wholly baseless. As Goldwyn, Sr. once famously said: “Pictures are for entertainment. Messages should be delivered by Western Union.” Yet, that was the same Gold 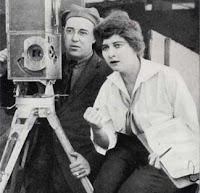 wyn who displayed consistently good taste in his own productions, like Dodsworth, Wuthering Heights, and Best Picture winning The Best Years of Our Lives.

Though traditional in its approach, M&M’s subject matter readily lends itself to the tried and true format of generous film clips, interspersed with talking head interview sound-bites. The dramatic visuals of the silent era segments might even inspire some viewers to check out early classics, like D.W. Griffith’s brilliant Intolerance (even though it evidently was not a big hit in its day). Christopher Plummer’s professorial narration also adds a Ken Burnsian air of authority to the proceedings. For movie buffs, particularly those interested in Hollywood’s early years, M&M is overall quite informative and entertaining. It debuts on November 1st, continuing each Monday evening through December 13th (with encore broadcasts on Wednesdays), on the TCM network.
Posted by J.B. at 4:00 AM