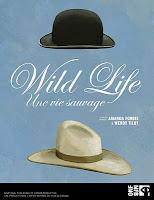 The Oscar field for best animated short film has a distinctly Canadian flavor this year. After Cordell Barker’s delightful short-listed Runaway fell short of a nomination in 2010, the National Film Board of Canada returned to Academy Award contention this year, netting two nominations for their short animated productions, bringing their grand total nominations to seventy-two in seventy-three years of operation. Both screen as part of the annual showcase of Academy Award nominated shorts, which opens this Friday in New York at the IFC Center.

While nature plays a role in Amanda Forbis & Wendy Tilby’s Wild Life, as well as Patrick Doyon’s Diamanche (Sunday), they also share a weird, off-kilter sensibility. One of the strongest nominees, Wild Life (trailer here) is ostensibly a fish out of water tale about one of the many British ne’er do well gentleman who came to Western Canada to seek their fortunes as ranchers. Most of them made poor cowboys and Wild’s protagonist is no exception. While the culture clash themes are cleverly addressed, there is a subtle undercurrent of David Lynchian menace that really distinguishes the film.

Shifting regions, Quebecois Patrick Doyon tells a relatively simply tale of a young boy, once again enduring his family’s Sunday rituals in Dimanche (trailer here). However, it takes a trippy detour involving a bear. It is strange and somewhat sad, just like childhood.

Perhaps the strongest nominee, coincidentally considered the frontrunner, also has a very strong sense of place, but in this case it is Louisiana. Produced entirely within the state, William Joyce & Brandon Oldenburg’s The Fantastic Flying Books of Mr. Morris Lessmore begins in New Orleans with a scene clearly inspired by the recent hurricanes that have wracked the state. Like many New Orleanians, Morris Lessmore takes refuge, finding a new home in a literal world of books. Employing inventive fairy tale imagery, Flying Books is a sophisticated paean to literature, offering the greatest depth of the animated program.

In contrast, Grant Orchard’s A Morning Stroll (trailer here) is essentially a bit of hipster playfulness, but it is rather funny, depicting the changes wrought on New York City when a chicken takes his titular promenade in 1959, 2009, and 2059. While pleasant, Enrico Casarosa’s La Luna, from Pixar, is a rather standard fable about a young’s boy’s discovery of the family’s fantastical business. Indeed, this just does not seem to be the animation studio’s best year.

Ranging from nice enough to very good, the nominated animated shorts are a solid slate overall, with Flying Books and Wild Life ranking as standouts. In the past, the animated program has been supplemented with several films that made the shortlist, but did not ultimately get one of the five nods. Strangely though, this year instead of shortlisted films, several environmentally themed shorts will play along with the nominees. Frankly, unless the relevant rights were impossible to secure, this dilutes the “Oscar-ness” of the program and diminishes the value of the shortlist status. It also means a visually striking (and viscerally anti-war) film like Damian Nenow’s Paths of Hate was passed over in favor of the clumsily didactic Skylight.

Regardless, films like Flying Books, Wild Life, and Morning Stroll are definitely well worth seeing, especially on a relatively big screen. Recommended for at least four of the real Oscar contenders, the 2012 Academy Award Nominated Short Films open this Friday (2/10) in New York at the IFC Center.
Posted by J.B. at 3:00 AM