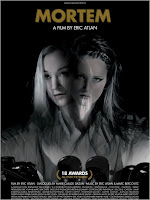 Death never takes a holiday. When a young woman’s spectral companion manipulates her into stopping at a desolate hotel, it must be all business. However, things get more complicated than either expects in Eric Atlan’s trippy Mortem (Czech trailer here), which screens during the 2012 edition of Film Comment Selects, hosted by the Film Society of Lincoln Center.

Jena and her fellow rider evidently enjoy feeling the wind in their hair as they motorcycle helmetless down lonely country roads. The fog though is a little too much forcing them to stop at truly gothic looking hotel. It seems the proprietors have been expecting them, or at least Jena’s companion, whom they can see, but she cannot, yet. It seems the uncanny woman has arranged to do some ominous business at their establishment, once the creepy staff leaves her to it.

Viewers soon learn Jena and the strange woman are profoundly connected and once she reveals herself, it is supposed to be curtains for the mortal woman. To the surprise of her ghostly captor, Jena’s will to live proves quite strong. Much like the knight in The Seventh Seal (a head-smackingly obvious influence on Mortem), Jena shows great resourcefulness navigating the games and rituals of death. As the fateful night advances, the stakes increase for everyone.

Mortem is a very strange stylistic and tonal hodgepodge. The opening scenes play like high camp, but as it cranks up the metaphysics, it gets deadly serious. It is almost like David Lynch took over the helm of Gene Wilder’s Haunted Honeymoon after the first fifteen minutes. Fortunately though, this is no Lost Highway. Atlan actually wants viewers to follow his story, which seems to follow its internal rules well enough once established.

It will still baffle the lowest common denominator, but at least Atlan offers them some steamy distractions. As it happens, Jena’s mysterious tormentor likes her a lot, which gives her a weakness to exploit. Indeed, for a surreal and cerebral genre movie mash-up, Mortem is rather hot.

Atlan and Marc Bercovitz, the co-producer and co-composer of the deliberately overbearing Bernard Hermann on steroids score, were clearly not concerned about going too far over the top with Mortem. In a way though, that is rather refreshing. It has been a while since a film has really gone for broke, but this one certainly does.

Panchenko Daria and Diana Rudychenko are, yes attractive, but also pretty compelling as the supernatural chess players. While their characters could easily be reduced to archetypal cut-outs, they suggest each has a real emotional investment in the face-off.

Gorgeously shot by the director-cinematographer in moody black-and-white, Mortem has all kinds of noir going on. No doubt about it, this is a weird film, but mostly in a good way. Frankly, considering how atmospheric and narrative driven Mortem is (not to mention the other attention generating aspects), it is surprising it has not been snapped up by an American boutique distributor yet. Recommended for genre audiences looking for something new, Mortem screens again this Tuesday afternoon (2/21) at the Walter Reade Theater, as part of this year’s Film Comment Selects.
Posted by J.B. at 4:00 AM