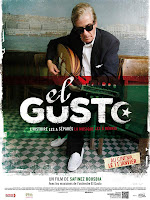 It is time to rock the Casbah, but the music will be Algerian Chaabi rather than British punk. A romantic and elegiac fusion of Arab-Berber and Andalusian musical forms, Chaabi was the popular music of Algiers’ coffeehouses, frowned upon by the classical elites. Of course, the average Algerians loved it, including both Jews and Muslims. Split apart by politics, one of the leading Chaabi orchestras of the 1940’s and ‘50’s reunites in Safinez Bousbia’s El Gusto (trailer here), which screens during the 2012 Tribeca Film Festival.

Like an Algerian Duke Ellington, bandleader El Hadj M’Hamed El Anka established Chaabi as a music worthy of concert hall respectability, while never losing touch with his fans on the street. He led the top outfit, featuring both Muslim and Jewish musicians, reflecting the Casbah’s demographics. Unfortunately, following independence in 1962, the Jewish band-member found it advisable to seek refuge in France, as did nearly all Jewish Algerians. Surely, the UN is still working overtime to protect their right of return, aren’t they? Yeah, just checking.

Frankly, Bousbia largely steers clear of politics, past, present, and future, which is a rather shrewd strategy. Instead, she concentrates on the Chaabi old-timers, who she plainly fell in love with, ever since she wandered into the antique (junk) store of Monsieur Ferkioui. After a few of his stories about the glory days with El Anka, she was hooked. Over a two year span, she tracked down the surviving members in Algeria and France, eventually producing their reunion concert in Marseilles. Needless to say, it was a hit, leading to subsequent dates, a CD supported by a full tour, and finally El Gusto, the documentary she has been filming the entire time.

It is a perfectly apt comparison, but let us try to get through this review without mentioning a certain Wim Wenders documentary about Cuban music. El Gusto is worthy of its own distinct identity. Frankly, by music doc standards it is unusually well made. In her arresting opening vistas, Bousbia dramatically illustrates the Casbah’s crumbling grandeur, resembling an ancient Rio overlooking the Mediterranean. She then takes us on a picturesque tour of the winding backalleys leading to Ferkioui’s shop. Suddenly, it is easy to understand how Pépé le Moko could hope to get lost here.

When the musicians finally assemble, there is plenty of backslapping and some relatively amusing anecdotes. Without question though, the music is the main event. Perhaps not to the tastes of those raised on fast food music, the elegance, lyricism, and insinuating rhythms of El Gusto Orchestra’s Chaabi still ought to appeal to aesthetically mature listeners, even if they are not well versed in the musical traditions of the region.

Although Bousbia is a constant presence throughout the film, she has a knack for staying out of the way. As a result, some lovely sights and sounds are captured in her documentary. Recommended for world music listeners and students of Arab-North African culture, El Gusto screens this coming Monday (4/23), Tuesday (4/24), and Saturday (4/28) as the Tribeca Film Festival continues in venues across the city.
Posted by J.B. at 11:00 AM