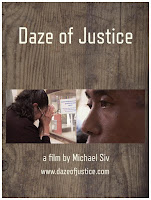 The stakes are high, but the proceedings of the Khmer Rouge Tribunal are often tediously dry. To some extent, the legalistic tone is necessary, but it often plays into the hands of the Communist Khmer Rouge defendants, who wish to keep the truth bottled up. Remarkably, Hong Siu Pheng came back for more. He watched the prosecution of his father, Kaing Guek Eav, a.k.a. “Comrade Duch,” from the protected chambers provided for family members, but he will return to witness the trial of Nuon Chea and three other high ranking war criminals with survivors of the genocide. It will be a difficult experience, but it precipitates small, highly personal steps towards reconciliation in Michael Siv’s Daze of Justice (trailer here), which screens during the 2016 Asian American International Film Festival in New York.

In hopes that the truth will finally come out, Cal State Long Beach Professor Leakhena Nou recruited several aging survivors of the Khmer Rouge genocide to confront the accused in court. Siv, the son of a survivor, will document their journey as an observer. However, the story takes an unexpected turn when Hong Siu Pheng agrees the accompany them during the trial.

He clearly lives a hardscrabble life with his family in the provinces, so the survivors cannot accuse him of benefiting from his father’s connections. Frustratingly, he apparently learned little from his father’s tribunal, judging from the bland, relativistic platitudes he repeats. However, he quickly changes his tune when he finally visits the notorious Tuol Sleng prison, where his father oversaw the constant torture and executions, as well as the Choeng Ek Killing Fields memorial. It is like he literally deflates on screen.

Although they are obviously wary around each other, the survivors direct little overt hostility towards the mass murderer’s son and vice versa. Belatedly, Hong Siu Pheng seems to finally face up to his uncomfortable family history, which also happens to be deeply troubling national history. For the good Professor, he clearly represents the nation in microcosm. Unfortunately, it just isn’t practical to take every deliberately misinformed citizen on a similar excursion, but that is presumably why Siv and his cameras were welcomed into such private moments.

Hong Siu Pheng is indeed a deeply compelling figure, who carries the stigma of his father’s crimes, but holds none of the culpability. The doc obliquely questions just how much the Tribunal’s heart is in these prosecutions, without sounding paranoid and conspiratorial. Daze is sympathetic towards all innocent parties (broadly defined), while capturing the hushed eeriness that now hangs over Tuol Sleng and Choeng Ek. It is a highly personal film, but it also holds wider national significance for Cambodia. Respectfully recommended, the sixty-nine-minute Daze of Justice screens this Sunday (7/24) at the Village East, as part of this year’s AAIFF.
Posted by J.B. at 6:00 AM