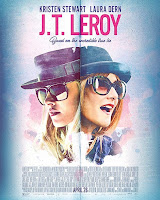 It was the biggest literary scandal to rock book groups until James Frey’s A Million Little Pieces was revealed to be a fraud a few months later. At least, the books in question were always billed as novels, even though heavy autobiographical elements were explicitly implied—but implied by whom? In phone interviews, it was Laura Albert, the author who wrote under the LeRoy name and played him in phone interviews, but it was her sister-in-law Savannah Knoop who assumed the role for photo shoots and public appearances. They really didn’t think they pulling a fast one until the story broke according to Justin Kelly’s not so dramatic retelling of the tale in JT LeRoy, which opens tomorrow in Los Angeles.

By the time Knoop moved to San Francisco, Albert was already a bestseller under the LeRoy name. For reasons that are never made clear, she felt more comfortable writing her emotional revealing fiction pseudonymously, yet she was still quite possessive of her work. She also enjoyed the game-playing aspect, particularly when she took on the persona of LeRoy’s brash British agent, Speedy. However, LeRoy was developing such a following, she needed the boyish Knoop to serve as LeRoy’s socially awkward, mono-syllabic “body.”
,
Weirdly, when Knoop appears as the androgynous LeRoy, she looks and sounds a lot like Johnny Depp. Regardless, it is hard to understand why so many people were apparently so fascinated by a person who is presented to be so painfully shy and charisma-challenged. Frankly, it is altogether baffling when the fictional actress Eva (transparently modeled on Asia Argento, who directed the film adaptation of LeRoy’s The Heart is Deceitful Above All Things) becomes so preoccupied with him (as she knew LeRoy).

To her credit, Kristen Stewart totally dives in and completely immerses herself in the role of LeRoy (or rather Knoop playing LeRoy), whereas as Albert, Laura Dern's homespun histrionics always sound like they were intended for the camera's benefit. Yet, the real problem is Kelly’s screenplay has the depth of a USA Today article. It provides a coherent chronology of events, but gives viewers no sense of anyone’s motives, beyond the most cliched, bargain-basement psycho-sexual analysis.

It is too bad, because Diane Kruger is spectacularly vampy as Eva and Jim Sturgess provides a humanizing dimension as Knoop’s brother (and Albert’s husband), Geoffrey Knoop, but Kelly’s treatment of the material never goes below the superficial surface level. Seriously, do we ever get tired of hearing how sometimes fiction holds a higher form of truth? Arguably, JT LeRoy would be better suited to airings on Lifetime than showings in theaters. Not recommended, it opens tomorrow (4/26) in the LA area, at the AMC Sunset and Laemmle Playhouse and Monica Film Center.
Posted by J.B. at 10:00 AM