Dan Curtis’s cult-favorite TV show, Kolchak: The Night Stalker has yet to get the credit it deserves as a forerunner to the X-Files. He gave us a true-believing investigative muckraker, who was constantly warning a skeptical and scornful world of supernatural dangers. Apparently, the late Curtis will have to wait a little longer for that overdue acknowledgement, because Kolchak is only mentioned in passing during a new documentary profile of the TV horror maestro. Instead, it is his two greatest hits, The Dark Shadows and Winds of War that dominate his career survey in David Gregory’s documentary Master of Dark Shadows, which releases today on DVD and VOD.

He started in sales, but Dan Curtis knew he could produce better programming than the syndicated packages he was peddling. The first production he sold was a golf show that nobody really remembers, but his biggest and unlikeliest success was the gothic horror daytime soap opera, Dark Shadows. Like most cult crossover hits, the ratings started out modest, but when Curtis fully embraced the horror elements, kids started flocking to the show. It really hit its stride when Jonathan Frid was cast as reluctant vampire Barnabas Collins.

Decades later, the show maintains a loyal following, having spawned two movie spin-offs, an early 1990s prime time TV remake, and Tim Burton’s lackluster feature film reboot. Books continue to be published and fans still flock to conventions. Yet, nobody would argue the high-point of Curtis’s career came when he produced and directed the blockbuster Emmy-winning mini-series The Winds of War. The subsequent War and Remembrance was also a major prestige production, but it did not match the lofty heights Winds reached. 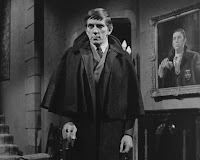 It makes perfect sense that Dark Shadows would be the central focus of Gregory’s doc, with the Herman Wouk mini-series getting the most secondary attention. However, a lot of great horror television gets glossed over, such as the original Kolchak TV movies, the Jack Palance Dracula, and Trilogy of Terror, features the fetish doll that attacks Karen Black. Frankly, it is pretty problematic the great Richard Matheson (who wrote or co-wrote all the above fan favorites) is never mentioned.

Still, there is definitely some good material for Dark Shadows fans. Watching Gregory’s film will make viewers want to revisit Curtis’s signature show, which is a crucial test of its effectiveness. It is also nice to see Curtis get the recognition he deserves. Master is definitely intended for true blue fans, but any regular genre consumer will be entertained by the deep dive into Collinwood Mansion. Recommended for those who remember 1960s television nostalgically, Master of Dark Shadows releases today (4/16) on DVD and VOD.
Posted by J.B. at 9:00 AM