Yuri Gagarin’s manned space flight was a massive PR victory for the Soviets, but they lost nearly all their newly acquired prestige two months later when Rudolf Nureyev defected in the Paris airport. Gagarin only went into space once, but most of Nureyev’s best performances were ahead of him. Jacqui Morris & David Morris chronicle the iconic dancer’s full life and career in Nureyev, which opens this Friday in New York.

Tellingly, Nureyev describes himself as more Tatar than Russian in some of the extensive archival interviews Morris & Morris smoothly incorporate into the film. Of course, he was first and foremost a dancer. For most dance patrons, the real news of their documentary is all the previously unseen footage of Nureyev they discovered, included his performances of Martha Graham and Paul Taylor choreography, as well as hazy footage of the young, unknown Nureyev in Russia. Plus, the film features snippets of original dance that thematically accompanies the ghostly reminiscences of his friends and colleagues.

Morris & Morris do a decent job covering Nureyev’s defection, but it is not the centerpiece of the film, as it is for Ralph Fiennes truly excellent The White Crow. Arguably, for them, Nureyev’s close were-they-lovers-or-not artistic collaboration with British prima ballerina Margot Fonteyn is the central defining aspect of his life. In the process, they cover a fair amount of her life, which is fascinating. 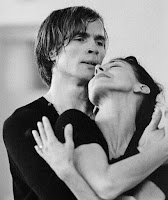 Nureyev the doc also does a nice job explaining the ballet’s significant but somewhat ambiguous relationship with the Soviet regime, including its notorious broadcasts of Swan Lake during episodes of internal strife. Perhaps even more revealing are the details of the French Communist Party’s coordinated campaign to heckle and intimidate Nureyev during his first post-defection performance.However, the film’s third act anti-Reagan biases get rather tiresome (no, Reagan did not miraculously cure AIDS, but nobody has ever cured a virus, to this day.) Still, there are striking time capsule moments, as when Nureyev, at the absolute peak of his powers, takes a two-minute standing ovation on the Dick Cavett Show (anyone under thirty will probably have to Google him).

Of course, the dance is the thing. Morris & Morris vividly illustrate Nureyev’s legendary talents. It is more than just a mere greatest hits package. In terms of cinema, The White Crow is the better film, but Nureyev is still an impressive dance showcase. Recommended for ballet enthusiasts, Nureyev opens tomorrow (6/7) in New York, at Film Forum.
Posted by J.B. at 6:00 AM