Lighthouse keeping was a heck of a profession. So-called “wickies” shared all of sailors’ common superstitions, but faced unique challenges of isolation, inclement weather, and potential madness. Recently, filmmakers have discovered how well suited these lonely outposts are to serve as the settings for horror movies and psychological thrillers. Rising genre star Robert Eggers and his co-screenwriter brother Max looked to Edgar Allan Poe’s unfinished short story and the historical “Smalls Lighthouse” incident as inspiration for The Lighthouse, which screens during MoMA’s annual Contenders series.

Ephraim Winslow assumes he will be sharing most of the lightkeeping duties with the senior keeper, Thomas Wake, but instead the crusty old timer assigns him all the menial tasks, while hoarding the hands-on light-tending for himself. He seems perversely attached to the light, even stripping himself naked in its presence.

In addition to Wake’s blowhard bullying, Winslow must also fend off a rather mean-spirited one-eyed seagull. Of course, Wake sternly warns him against harming the nasty bird, because he shares the old folk belief that seafowl carry the spirits of dead sailors. The junior lightkeeper is further unnerved by visions of a seductively sinister mermaid and a tentacle beast worthy of Lovecraftian fiction. The only thing keeping him sane is the expectation the ferry will arrive soon to take him back to the mainland—but it doesn’t.

The Eggers Brothers’ narrative is very much like that of Chris Crow’s The Lighthouse, but the two films are worlds apart stylistically. Crow’s film is a tight, tense two-hander, but it looks like the classy BBC Films production that it was. In contrast, Eggers’ Lighthouse is shot in a claustrophobically tight aspect ratio and lensed in a strikingly stark black-and-white by cinematographer Jarin Blaschke.

The resulting film is like watching a fever dream recorded on a vintage kinetoscope. In terms of tone, some of the best comparative titles might be the trippier, occult-themes films of Georges Méliès. It looks incredible, but the Eggerses really couldn’t figure out how to end it, so they just sort of stop without fully developing a number of their themes. 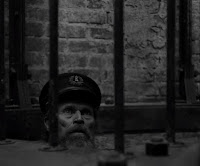 Nevertheless, the film provides a showcase for both Willem Dafoe and Robert Pattinson to go completely nuts in very different but equally impressive ways. As we would expect, Dafoe is in his element, chewing the scenery and spewing salty venom as Wake. The real surprise is Pattinson, who is a live-wire of paranoid, delusional energy as Winslow (if that is indeed his name). They are terrific barking at each other one minute and then falling into an uneasy camaraderie the next.

Presumably, no gulls were harmed in the production of this film. Still, that bird is so nasty, nobody would have sympathy for it. Either way, you have to give great credit to the animal handling team. Yet, it is Robert Eggers’ visual compositions that really make the film what it is. It is definitely worth seeing, but it just doesn’t have the same knock-out punch ending that made his breakout debut The Witch so memorable. Recommended for fans of what non-genre critics have dubbed “elevated horror,” The Lighthouse screens this coming Monday (12/30) at MoMA, as part of this year’s Contenders.
Posted by J.B. at 3:00 AM