Iskander: Shadow of the River, on Shudder 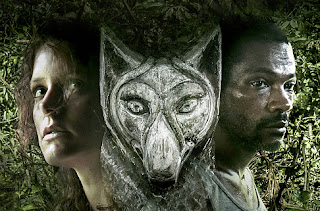 The last time most viewers saw French Guiana on screen, either Steve McQueen and Dustin Hoffman or Charlie Hunnam and Rami Malek were escaping from a French penal colony in their respective Papillons. Neither film exaggerated the steamy climate. The French overseas department borders Brazil and Suriname, but it is as frog as the Champs-Elysees or French Algeria until 1962. As such, the same Gendarmerie and National Police are responsible for the law enforcement. It is a tough posting, but Chloe Bresson is a tough cop, but not exactly a diplomatic or politically shrewd one. Her first case in the tropical region turns into a nightmare with supernatural dimensions in the four-episode Iskander: Shadow of the River, directed by Olivier Abbou, which premieres today on Shudder.

Bresson’s new boss has no illusions how she ended up in Guiana. Her career is in freefall, but she still refuses to change her hard-charging ways. Although they clash initially, she just might be the perfect partner for Det. Joseph Dialo. He is much better equipped to deal with the indigenous population (just about anyone would be), but he is just as driven. In fact, he will become even more obsessed with their latest (and first case), for personal reasons that will be revealed over time.

The bodies of a Western couple are found brutally murdered and strung up on the mast of their small yacht. There is also the body of an exsanguinated sloth, but their six-year-old-ish son is missing. Given the hallucinogenic properties of the sloth’s blood and the word “Iskander” carved into the victims’ chests, the detectives quickly conclude the crimes are the work of a voodoo cult. Bresson follows up references to Iskander in previous case files, while Dialo simultaneously pursues his own leads, from more personal sources.

Iskander is loaded with atmosphere, dread, foreboding, and an especially keen sense of place, but the narrative could have benefited from a little tightening. Frankly, it might have been better conceived as a two-hour feature than a three-hour-and-change limited series. Be that as it may, it is cool to see such a dark, Conrad-esque exercise in genre storytelling. Even though Abbou and creator-co-screenwriter Aurelien Moras are careful to respect all Guianese ethnicities (except maybe the temp-working Euro French), it still pretty impressive they have the guts to build a horror story around voodoo rituals and indigenous lore.

Stephane Caillard portrays an impressive array of anti-social behavior as the abrasive and damaged Bresson. However, as Dialo, Adama Niane calls and raises her with his quiet but highly combustible intensity. These characters are wildly flawed, but the two primaries still draw us in and keep us invested in them personally. Issaka Sawadogo also chews some scenery with a distinctive blend of cynicism and gravitas, as their chief, Commissioner Koda.

Watching Iskander will make you sweat out of humidity sympathy. It vividly transports viewers to a place we rarely see on film and TV in any context, delving into its darkest, primal corners. Despite some early pacing issues, it is a potently disorienting sun-drenched, hothouse style of supernatural yarn. Recommended for fans of so-called “elevated horror” and MHz’s European procedurals, Iskander: Shadow of the River is now streaming on Shudder.
Posted by J.B. at 6:00 AM