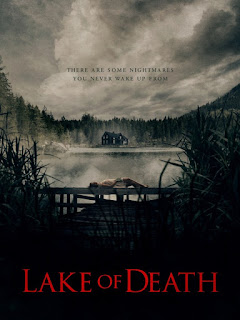 Ruminating is unhealthy, especially in horror movies. Don’t dwell on the past or wallow in guilt, because it only invites trouble. Whatever you do, don’t leave the city on veritable guilt trip. For the sake of “closure,” Lilian does exactly that, but she will also be accompanied by a handful of acquaintances, who commit all the other drunken, jealous horror movie taboos. She might just get permanent closure in Nini Bull Robsahm’s Lake of Death, which premieres tomorrow on Shudder.

As orphans, Lillian and her twin brother Bjorn were always close—too close viewers can obviously tell. Last summer, he disappeared after she left, presumed to have drowned in the lake. This is her first time back to process all her grief and guilt. Inexplicably, her ex, Gabriel, has joined her, even though her prospective new man, outdoorsy Kai is a local. In addition, she brought along her pal Sonja, her latest boyfriend Harald, and Bernhard, an annoying paranormal podcaster.

Anyone who really knows their Norwegian cinema and mystery novels will recognize the characters and premise largely parallel that of Andre Bjerke’s novel Lake of the Dead (written under the pen-name Bernhard Borge), adapted for film in 1958. Robsahm modernized the circumstances a bit, turning the crime novelist into a podcaster. However, she kept the legend of Gruvik, the old rustic woodsman, who supposedly murdered his family and then killed himself after falling under the lake’s evil spell.

Perhaps Lake is a much more rewarding viewing experience if you are well versed in the precursors Robsahm is riffing on. Most American horror fans will find it a competent and slickly produced, but rather predictable cabin-by-the-lake movie. Seriously, if you are surprised by the third act revelations than you do not know the genre very well. Nevertheless, there is something satisfying about the atmospheric location and creepy set design. Likewise, real fans will also get a kick out of John Debney’s foreboding score (some of his best recent work).

Frankly, Iben Akerlie plays Lillian as such a mousy basket-case, it is hard to understand why everyone is so interested in her. At least Sophia Lie’s Sonja serves as her energetic polar opposite, while Jakob Schoyen Andersen steals most of his scenes as the unfiltered Bernhard.

Clearly, Lillian and her friends have never seen a horror movie or read a Borge novel, because they do just about everything wrong. They are just asking for it, but Robsahm is relatively reserved in giving it to them, which might be the film’s most glaring shortcoming for fans. Still, the general vibe is not unlike the first season of Shudder’s Black Lake, which is not a bad thing at all. Mostly recommended for horror junkies looking for some lake house shenanigans, Lake of Death starts streaming tomorrow (7/16) on Shudder.
Posted by J.B. at 6:00 AM