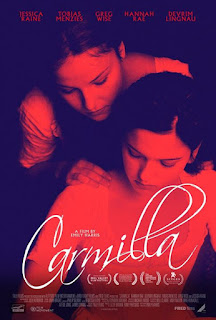 Dracula might be slightly more famous, but J. Sheridan Le Fanu’s Carmilla has also spawned some impressive adaptations, including Carl Dreyer’s silent classic Vampyr, Ben Johnston’s opera, and Hammer’s The Vampire Lovers, with the great Ingrid Pitt playing Carmilla Karnstein. It is also inspired some fairly exploitative takes, because of its Sapphic overtones. There will be neither arias or gratuitous nudity, but there is still very definitely a burgeoning sexuality that will not be repressed in Emily Harris’s Carmilla, which releases virtually this Friday.

Lara Bauer lives a sheltered but lonely existence, as the daughter of a wealthy English continental landowner, with only her puritanical governess, Miss Fontaine, and a handful of domestic servants for company. She is therefore deeply disappointing when the visit from one of her few friends, the daughter of her father’s old comrade, is postponed, due to the girl’s mysterious illness. Shortly thereafter, a freak carriage accident occurs outside the estate grounds. The only survivor is a striking but silent young lady, whom Bauer’s father will host as she recuperates.

So far, so Le Fanu. Naturally, Lara is drawn to their guest, whom she names “Carmilla,” partly out of desire for companionship. However, there seems to be something deeper to her attraction. Fontaine has her suspicions as to what that might be—and it alarms her tremendously. In fact, we are led to deduce the governess was once involved in her own shocking scandal, so she now enforces strict Calvinist propriety with the zeal of a convert.

The atmosphere and period design of Harris’s Carmilla are first class all the way, but none of the departures from Le Fanu’s original narrative are improvements in anyway. In particular, Fontaine’s judgmental intolerance never feels like a product of her character, but rather serves the film’s message instead. Sexual repression is thoroughly baked into Le Fanu’s source novel and just about all adaptation, post-Dreyer, but the fact that Carmilla has left a string of emaciated corpses in her wake and the presumption she is preying on the girls of the neighboring village are what give the story its suspense and urgency. Rather perversely, Harris largely loses sight of the vampirism, rather turning Le Fanu into D.H. Lawrence.

Harris’s Carmilla looks terrific, thanks to the stylish work of cinematographer Michael Wood as well as that of production designer Alexandra Walker and costume designer John Bright, who really embrace the gothic tradition. The problem is the film is more neurotic than terrifying. It just needed more bite, in every sense. The results are not terrible, but Chernovetzky & Devendorf’s Curse of Styria was more rewarding, but it was not embarrassed by its vampire business. Earning only a tempered recommendation for Karnstein loyalists, Carmilla opens virtually this Friday (7/17).
Posted by J.B. at 6:00 AM