Sundance ’21: In the Same Breath 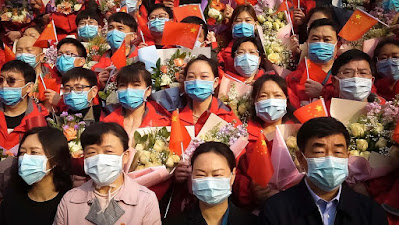 Censorship kills—and not just those in the censored country. If you ever doubted it, Xi and the CCP have proved it for over a year. Intrepid documentarian Nanfu Wang exposes how early reports of the Covid-19 outbreak in Wuhan were covered-up, as well as the Communist Party’s propaganda spin efforts once the pandemic became too large to conceal in In the Same Breath. Her timely documentary premiered last night during the 2021 Sundance Film Festival, which was forced to pivot to online this year precisely because of the events and decisions she documents.

When Wang visited China in early January, 2020, she did not think very much at the time about cursory state media reports claiming eight doctors who were arrested in Wuhan for spreading false rumors of a SARS-like virus, but she returns to that moment over and over in Breath. However, when she started seeing an alarming volume of social media reports of a highly contagious and debilitating flu, she realized there was more to the story than the government was letting on.

Wang’s team archived as much of the social media posts as they could before the government deleted them and reached out to the posters. Eventually, she hired a local crew in Wuhan to record conditions in the hospitals and help her conduct remote interviews. She draws out grieving family members and shines a light on the harassment of whistleblowers, like journalist-lawyer Chen Qiushi, who has been conveniently missing since early February 2020.

What emerges is a far more complete and disturbing picture than what viewers saw in Hao Wu’s 76 Days. We have respect for his past work, but Wu’s film rather awkwardly shares a lot of similarities with the characteristics of the state media’s heroic Covid first-responders TV documentaries, as described by Wang.

The way Breath explains the relationship between censorship and propaganda is especially valuable. Merely suppressing embarrassing information is not enough for a regime like the CCP. They also need to create a favorable alternate narrative. In memorably telling sequences, Wang and co-editor Michael Shade shows dozens of Mainland “news” broadcasts repeating the same script, word-for-word verbatim. The effect is both absurd and chilling.

Less successful are her attempts to draw a parallel between the spread of the virus in Wuhan, abetted by state censorship, with the spread of misinformation here in America. However, she is still even-handed in her approach. Indeed, the presentation of Saint Fauci’s “evolving” medical proclamations makes the media darling look terrible.

Regardless, it is safe to say both countries managed the Covid crisis poorly, but Wang is clearly concerned the CCP has spun it better. She doesn’t do Trump’s reputation any favors, but Breath lucidly and convincingly pinpoints Wuhan as the virus’s point of origin and identifies crucial ways it could have been contained there, had the Party bureaucracy been more honest and proactive.

Frankly, it seems rather surprising she was still allowed to return to the Mainland after her gutsy exposes Hooligan Sparrow and One Child Nation, but the uncomfortable honesty of Breath could very well get her banned this time around. That would be a painful sacrifice for Wang, who still has family on the Mainland, but she has an admirable dedication to the truth. Very highly recommended, In the Same Breath screens online again tomorrow (1/30), as part of this year’s Sundance.
Posted by J.B. at 5:30 AM