Ailey: The Man and the Documentary 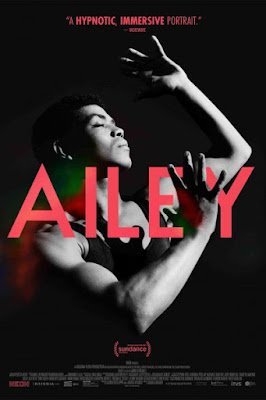 If you want to enjoy and jazz or blues show on Christmas night in Manhattan, sometimes the Alvin Ailey Dance Theater (in residence at the City Center) is your best bet. Ailey’s “Night Creature,” set to the music of Ellington is considered a masterwork and “Blues Suite” from 1958 was one of his first true classics. Subsequently, the company even interpreted the music from Dizzy Gillespie’s film, Winter  in Lisbon (if you can find that one streaming somewhere, let me know). Logically, Ailey always had a keen affinity for the jazz and blues of his southern roots and his New York adopted-home. Jamila Wignot chronicles Ailey’s life and repertoire in Ailey, which opens theatrically this Friday in New York.

Wignot incorporates plenty talking head interviews from Ailey company alumnus, but the film gets most of its vibe and personality from archival recordings of the man himself. It often gives Ailey a dreamy quality, somewhat reminiscent of James Erskine’s Billie. To add a contemporary element, it also follows the rehearsals for a special anniversary gala, but those sequences are the least interesting part of the film.

Frankly, Ailey’s eloquence outshines that of everyone else—and his choreography is even more expressive. We see striking excerpts from “Blues Suite” and his most popular work by far, “Revelations.” At one point, Ailey discusses the burden of a “greatest hit.” Like most artists, he was always more interested in his latest piece, but he had to admit, it still held up when he watched it again years later.

Despite its somewhat adventurous aesthetic, the strength of Ailey is its simplicity. It presents the artist in his own words and through his dance and choreography. It really doesn’t need a lot of hyperbole or explanation drizzled on top.

Ailey looks great and sounds evocative of Ailey’s life and times, because he often chose terrific music for his choreography. This is a fitting showcase for the artist and his company, which ought to do more to popularize modern dance than high profile documentaries, like Wim Wenders’ Pina. Again, the critical element is Ailey’s accessibility, based on his blues affinity. Highly recommended for anyone interested in American dance and music, Ailey opens this Friday (7/23) in New York.
Posted by J.B. at 6:00 AM