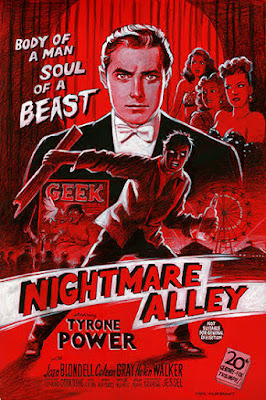 Joy Davidman was married to two notable writers. Her second husband was the love of her life, C.S. Lewis (their relationship was the subject of Shadowlands).Her first husband was the abusive William Lindsey Gresham who achieved some notoriety for his hardboiled depictions of carny life. His best-known novel is due for a boost in sales thanks to the imminent release of Guillermo del Toro’s adaptation, but it was first filmed as an against-type vehicle for Tyrone Power. That was Edmund Goulding’s 1947 Nightmare Alley, which beats del Toro’s remake into New York theaters by re-releasing today at the Metrograph.

Stan Carlisle is a carnival grifter and drifter who is morbidly fascinated by the show’s geek attraction (a.k.a. side-show freak). He is also interested in “Madame Zeena” Krumbein for the techniques she developed for her mentalist act and Helen, a woman-in-jeopardy performer, because she is young and pretty. Krumbein’s alcoholic husband Pete jealously guards their secrets, but he has an obvious weakness to exploit.

Due to a strange chain of events, Carlisle becomes an elite night club mentalist using the Krumbein techniques. Yet, he naturally wants more. He might find an accomplice who can help him in Lilith Ritter, a psychoanalyst of dubious character and a genuine femme fatale.

Although Nightmare Alley initially flopped hard, it was rediscovered and rehabilitated relatively quickly. Goulding’s version remains within the realm of film noir, but it is easy to see del Toro could capitalize on elements like Madame Zeena’s fateful Tarot readings, Carlisle’s phony spiritualism, and the macabre geek act to blend it into horror and dark fantasy territory. Regardless, Goulding’s noir is especially dark (even by today’s standards) and pretty lurid for its time.

It also features a great performance from Power, who always did great work when 20th Century Fox allowed him to stretch a little (like in the under-appreciated The Sun Also Rises). He fully brings out the hard-bitten ruthlessness of Carlisle, but he also humanizes him and even forces viewers to sympathize with his classically tragic rise and fall. 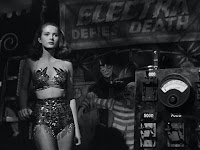 Helen Walker probably gave the performance of her career as the shrewd and seductive Ritter. Joan Blondell chews the scenery like the champ she was portraying Madame Zeena and former wrestler (and Dick Tracy villain) Mike Mazurki adds hulking humanism as Bruno, the carnival strongman who protects Molly. (She is a definitely a stereotyped innocent naïf, but Coleen Gray still makes a strong impression in the role.)

Shot by Lee Garmes in glorious black-and-white, Nightmare Alley looks exactly like what you want from film noir. Weirdly, it would pair up nicely with Lon Chaney Jr.’s Inner Sanctum B-movie, The Frozen Ghost, but Goulding’s film is more stylish and it resonates more deeply. Very highly recommended, Nightmare Alley (the original) opens today (11/26) in New York, at the Metrograph.
Posted by J.B. at 6:00 AM