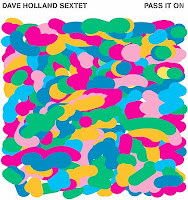 Sometimes American perceptions of British culture might be overly influenced by PBS reruns of Mr. Bean and the like. If you do not think of Brits as robust swinging jazzmen, you have missed some great music from the likes of Tubby Hayes and Don Rendell. You also probably have not been on the club or festival scene much in recent years, where British bassist Dave Holland’s bands have consistently been among the top headliners. After reconfiguring his regular working group into a sextet, Holland has recently released Pass It On, his first CD featuring the new line-up.

While the front-line of his new group are all frequent past collaborators, Holland has made some notable changes in the rhythm section. In a departure from past combos, the bassist added Mulgrew Miller, filling a piano chair usually left vacant in his groups. Holland rounded out his section with drummer Eric Harland, a musician he had played with on only a few prior sessions, but it was clearly enough to make an impression on the leader.

The balance of Pass consists of previous compositions Holland revisited in new arrangements for the sextet, including two tribute pieces. The title track is a funky dedication to drummer Ed Blackwell, whom Holland played with in groups led by the adventurous vibraphonist Karl Berger. Harland and Miller keep it bouncing along nicely, with the leader and Hart taking some expressive solos.

The second tribute piece is “Rivers Run,” composed in honor of multi-reed artist Sam Rivers, with whom Holland frequently recorded, including the avant-garde classic Conference of Birds. Easily the most diffuse and explorative track of the session, the passionate “Run” still sounds comfortably grounded in the post-bop tradition of the late 1960’s best exemplified by the second great Miles Davis Quintet (Holland himself would be hired by the trumpet legend shortly thereafter).

Though Holland may have fined tuned the instrumentation, Pass is still highly accessible, in keeping with the bright, crisply swinging music that made his evolving group one of the top draws on the jazz scene over the last decade and a half. Holland’s Sextet (with Miller on piano), conclude their recent tour with a four night stand at Birdland starting this Wednesday, the 8th.
Posted by J.B. at 3:59 AM