In 2000, Polish director Andrzej Wajda was awarded an honorary Oscar, an accolade typically bestowed on filmmakers whose most productive years are presumed behind them. However, eight years later, Katyń, Wajda’s most personal film yet, was nominated for the Best Foreign Language Academy Award, suggesting his creative drive is far from diminished. Though Wajda initially made his international reputation with work set during World War II, beginning in 1976, he daringly addressed the realities of Polish life under Communism in with a series of films, which ultimately led to his exile in France. Still highly relevant for addressing the corrupting power of propaganda, Man of Marble, the first of Wajda’s so-called “Solidarity” films, screens Friday, as part of the Lincoln Center Film Society’s Truth or Dare Andrzej Wajda retrospective.

Agnieszka believes in doing things the hard way. She is risking her entre into Polish television with her risky film school thesis. While everyone wants her to do another tedious industrial documentary, she has her sights set on Mateusz Birkut. Once a lead worker celebrated in Stalinist-era propaganda (including a grandiose marble statue since relegated to the National Museum’s basement “ash-heap of history”), Birkut mysteriously disappeared from public view, presumably for running afoul of the Communist authorities. Though discouraged at every turn, Agnieszka slowly starts to piece the puzzle together through lost film of his workers’ collective and reluctant interviews with his contemporaries.

Birkut originally came to prominence for supposedly breaking the single shift brick-laying record. However, the newsreel director who recorded the event confides to Agnieszka how he manipulated and outright fabricated aspects of the episode for propaganda purposes. Yet poor guileless Birkut originally accepts everything he is told at face value. As a result, when he falls out of favor with the Party for championing workers’ rights, it is wrenchingly difficult for him to adjust to life when essentially persona non grata.

Jumping back and forth in time, we see Agniewszka tangle with censors, while Birkut endures a humiliating trial for vague counter-revolutionary crimes. Pre-dating the formal establishment of Solidarity 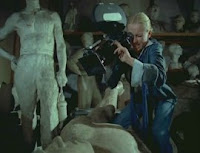 by four years, it is amazing Marble was made at all. It was indeed censored by the state prior to its initial release, but its sharp criticism of Polish Communism, both past and present, remained unmistakable.

Still, Marble is more than a mere protest movie. It is quite a visually exciting film, employing long shots and odd angles to tell Agnieszka’s story. The groovy soundtrack also nicely roots the contemporary story in the 1970’s. Both Krystyna Janda and Jerzy Radziwilowicz bring nuance and a sense of humanity to the roles of Agnieszka and Birkut, respectively. A tribute to true independent filmmaking, an expose of life’s precariousness under Communism, and an homage to Citizen Kane, Marble is a classic of international cinema. It screens at the Walter Reade this Friday and the following Sunday.
Posted by J.B. at 3:46 AM