Yeraz: Duo with Saxophone and Accordion 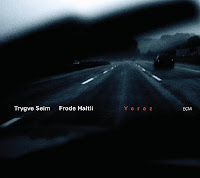 Those who do not associate the accordion with jazz, have never had the pleasure of discovering great jazz accordionists, like Frank Marocco, Leon Sash, and Gil Goldstein. Unfairly maligned as an oompah instrument, in the right hands the accordion can bring remarkable texture and depth to music, appearing frequently on genre-defying ECM sessions led by Eleni Karaindrou and Anouar Brahem, among others. Accordionist Frode Haltli has himself recorded for the label as a leader and with reed-player Trygve Seim’s groups. Something clicked when the fellow Norwegians played together, leading them to form a duo for festival engagements. The success of those performances culminated in the recent release of their first strictly duo recording, Yeraz.

Although Haltli has often played with jazz artists, his music is often classified with terms like “improvisational” and even “classical.” Both artists share an interest in various forms of folk music and are equally comfortable with both largely through-composed and freely improvised music, which is evidenced on Yeraz. Starting with the improvised prelude of “Praeludium,” the duo then segues into a medley of two compositions by controversial Armenian spiritualist G.I. Gurdjieff, “Bayaty” and “Duduki.” At times, Haltli’s accordion evokes an old world ambiance on the former, whereas the duo lock-in for the trance-like “Duduki,” suitable for the whirling dervishes that once inspired the composer.

Seim and Haltli also draw on Armenian source material with the traditional title track, “Yeraz,” with Seim’s plaintive tone and Haltli’s organ-like sustain suggesting a dirge or requiem. The following “L’Altria Storia” again features an extended prelude from Seim, introducing one the more distinctive melodies of the session. An intriguing composer, Seim’s originals suggest diverse influences, like the appropriately eccentric Tom Waits tribute, “Waits for Waltz,” which also showcases some of his most full-bodied jazz tenor work.

However, the duo’s most melodic playing comes on their radical but instantly recognizable reinterpretation of Bob Marley’s “Redemption Song.” Showing both a playful spirit and heartfelt respect for the original, it is an album highlight. Interestingly, some of the best jazz covers of pop material this year have appeared on highly original ECM releases, including Norma Winstone’s gorgeous rendition of Peter Gabriel’s “Here Comes the Flood” and the Marcin Wasilewski Trio’s sparkling reworking of Prince’s (or whoever he is) “Diamonds and Pearls.”

There are some arresting moments in Yeraz, as well as some surprisingly catchy music. Though the spacious duo format can sound somewhat diffuse at times, the combination of Seim’s saxophones, tenor and soprano, combined with Haltli’s accordion creates a consistently exotic and rewarding sound throughout.
Posted by J.B. at 3:42 AM