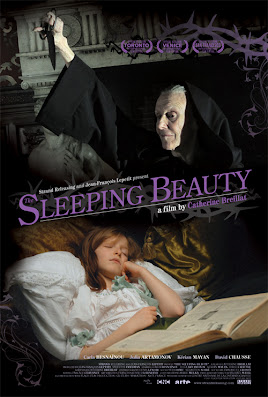 She might have been cast asleep for one hundred years, but it turns out Sleeping Beauty had an active dream life. Although French director Catherine Breillat took far more liberties with Charles Perrault’s Briar Rose fairy tale than her previous adaptation of Bluebeard, the Brothers Grimm would surely approve of her dark fantastical variations so strangely rendered in The Sleeping Beauty, her take on the familiar fable, which opens this Friday in New York at the IFC Center.

The time is indeterminate, but it may be somewhat more modern than the fairy tale’s vaguely medieval traditional setting. There are still bad witches and good fairies though. As per Perrault, Grimm, and Disney, a bitter old crone curses the newborn Anastasia to die on her sixteenth birthday from a fatal spindle prick. However, a trio of good fairies (who happen to be suggestively nymph-like in this version) partially counteract the spell, commuting the death sentence to a century long slumber.

From here, Breillat lights out into fresh territory, while still heavily borrowing archetypes from across the fairy tale canon. Anastasia will come of age as she sleeps, aging ten years in one hundred. She will also be a conscious dreamer, actively participating in the lives of those she meets. Ironically, the little princess almost immediately finds happiness when adopted into the rustic home of a single mother and her adolescent son, Peter. However, puberty turns Peter surly. It produces other urges as well, leading her adopted brother to run away from home with the mysterious Snow Queen.

As Anastasia sets out into her subconscious dreamscape in search of Peter, Beauty segues into a quest fantasy. Yet, arguably its closest cinematic comparison would be Sally Potter’s Orlando in which characters morph and evolve as they mystically reappear over the ages, tied together by destiny.

Though Breillat maintains a fable-like atmosphere throughout Beauty, it is not intended for children. Anastasia most definitely grows up, which is a fortunate thing in this film. Carla Besnainou is game enough for what must have been a bewildering production for a youngster, but she is not exactly an electrically engaging child actor. To be fair, Breillat almost uses her as a prop to be carried away by the sweep of her story. However, as Anastasia come of age, Julia Artamonov has the appropriate precocious allure for a Breillat film. In fact, Beauty’s supporting cast all look spot-on for the genre, including Rosine Favey’s evil witch, who could have just walked out of a Hammer horror film, as well as Camille Chalons, Dovnia Sichov, and Leslie Lipkins as the decorative fairies.

While Breillat’s Bluebeard was all about the telling of the tale, Beauty is more concerned about what happens when spells or broken, whether it be childhood or a fairy tale enchantment. Yet, Beauty keeps viewers more at an emotional distance than its uxoricidal predecessor. A surprisingly challenging film, with a uniquely disconcerting charm, Beauty is certainly recommended (and Breillat’s fairy tale project in general is well worth keeping up with). It opens this Friday (7/8) in New York at the IFC Center.
Posted by J.B. at 10:00 AM