After seeing what is store for these characters, one can hardly blame them for their apprehension. Of course, their unfulfilling self-absorbed live are entirely their own faults. Angst runs wild in Miranda July’s The Future (trailer here), which opens this Friday in New York.

When Jason and Sophie volunteer to adopt a cat requiring constant medical care, they resolve to grow-up and settle in their lot (and for each other, by implication). However, when faced with the thirty day waiting period before they can pick-up tabby, they decide to give their immature instincts free reign during their final month of “freedom.” Both quit their supposedly crummy jobs, with no real plan for the future. Granted, it is easy to see how his tech support job could be soul deadening, but Sophie’s gig teaching kids to dance ought to be quite coveted in today’s economy, especially since she does not seem all that talented.

The first two thirds of Future play like the world’s most self-important sitcom. Jason and Sophie are truly perfect for each other, because you would be hard pressed to find anyone more depressing or depressed. Their uncomfortable misadventures simply do not have currency with viewers living in the real world of everyday work and stress. Ironically though, the weird fantastical curveball nearly redeems film, finally tapping into that primal urge everyone has felt to stop time to reverse a screw-up of some sort.

While the highly stylized voice-overs sound rather artificially mannered, the use of the cat as an omniscient narrator is still a somewhat effective device. Unfortunately, it leads viewers to pass a decidedly harsh judgment on the characters, even though it is meant to be forgiving. 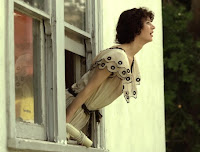 Plumbing the depths of shallow people only gets you so far. Despite the film’s pedestrian look, the third reel’s metaphysical climax is strangely distinctive. It takes a long time to get there though. Essentially, a film for the neurotic looking for on-screen company, The Future opens this Friday (7/29) in New York at the IFC Center.
Posted by J.B. at 8:00 AM