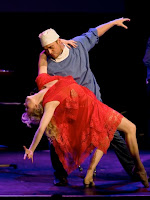 It sounds like a drama school drinking game. Some of Broadway’s top talent were divided into teams and given twenty-four hours to write, score, rehearse, and perform four original short musicals, with all the proceeds going to charity. It turns out to be a somewhat stressful undertaking (even without the added challenge of mounting inebriation), recorded for posterity in Elisabeth Sperling and Trish Dalton’s behind the scenes documentary, One Night Stand (trailer here), which has its world premiere this Sunday evening at the 2011 NewFest.

Stand has a fool-proof inherent dramatic device—a ticking clock. Indeed, there is not a lot of time for anyone to get diva-ish, but neuroses will definitely be let loose. It starts with the book writers and composers, who pretty much go with the first workable concepts they come up with. Dr. Williams lampoons hospital soap operas in gleefully broad and ribald terms. A bachelorette outing goes somewhat awry in Rachel Said Sorry. Multiphobia stages a mini-revue inspired by exotic fears, while Islands chronicles a zoot-suited Madoff’s quest for sanctuary on Staten Island. Given the abbreviated gestation time, the music is surprisingly memorable, downright catchy in cases.

Though none of the final products are what you would call polished, they are mostly quite entertaining. Of course, the professional cast definitely helps make it all work, the biggest names probably being Alicia Witt, Cheyenne Jackson (recognizable as Mark Bingham in United 93), and Richard Kind (quite good as a replacement in the Broadway production of Dirty Rotten Scoundrels). Jackson in particular really nails his numbers, despite struggling with the material during rehearsal. Of course, he was hardly alone.

Granted, Stand follows a somewhat predictable arc, watching the four teams flounder through rehearsal but more or less pull it together at show time. Yet, the scruffiness of their creative processes is quite engaging. Frankly, Broadway remains strangely under-explored by documentary filmmakers, aside from a handful of docs like Dori Bernstein’s perfectly solid Showbusiness and Stern and Del Deo’s truly outstanding Every Little Step. Stand probably falls someplace in between the two, which is a rather respectable place to be.

At least two of the 24-Hour Musicals, Dr. Williams and Rachel Says Sorry, have songs that lodge in the head, which is certainly saying something. The rather hot choreography designed for Mary Poppins’ Scarlett Strallen also makes Stand another good NewFest selection for straight guys. Briskly energetic and thoroughly appealing, Stand is highly recommended when it premieres this Sunday (7/24) at the SVA Theatre as part of the 2011 NewFest.
Posted by J.B. at 3:00 AM