Rohmer’s 4 Adventures of Reinette and Mirabelle

Events that seem look small from the outside are often quite momentous for those experiencing them first-hand. Eric Rohmer was a master at capturing those deceptively small episodes on film. He offers up a quartet of such vignettes in 4 Adventures of Reinette and Mirabelle (trailer here), which is currently playing a special one week engagement at Film Forum.

As the audience can tell from the opening credits’ distressing synthesizer pop music, Adventures was filmed quickly in the late 1980’s, while Rohmer’s Le Rayon vert was on a shooting hiatus. Aside from the soundtrack, the rest of the film is quite genteel, depicting the evolving friendship of Reinette, a young aspiring artist from the countryside and Mirabelle, a Parisian law student. In the first installment, The Blue Hour, the title characters are brought together thanks to a flat bicycle tire, while Mirabelle is on holiday at her parents’ “cottage.” A fast friendship develops over dinner and an invitation to spend the night to hear the “Blue Hour,” the brief minutes before dawn when nature is entirely quiet.

As the film progresses, it becomes clear the young women’s values differ in ways akin to what contemporary Americans would consider a Red State/Blue State divide. Reinette is naïve, falling for every panhandler’s sob story, but she is scandalized when Mirabelle assists a shoplifter in the third adventure, The Beggar, the Kleptomaniac and the Hustler, which plays out like a continental fusion of Woody Allen and O. Henry. While the second story, the relatively short The Waiter is often dismissed as a trifle, it is rather funny and it is hard to think of anything more quintessentially French than an encounter with a surly café server.

For many connoisseurs of French cinema, the final story is the real piece de resistance. With Selling the Painting, Reinette sets about to do just that, in order to pay her rent and finally establish herself in the Parisian art world. However, a bet with Mirabelle to remain silent the entire day would seem to complicate matters, but there is a method to their madness. Considerably younger in 1987, Fabrice Luchini was Adventures’ only really established cast-member, already quite adept at playing fuss-budgets. As the unnamed gallery owner, the Rohmer regular (including Claire’s Knee) slyly sends up hipster pretentions, but gets to deliver the old that-was-no-lady style punchline with perfect casual understatement.

Indeed, Luchini is completely in his element in Adventures, but the comparatively unheralded leads are also quite good. Though little has been heard from her since, Joëlle Miquel is somehow simultaneously endearing and convincingly neurotic as Reinette, while Jessica Forde’s intelligent screen presence solidly anchors the film as her more reserved and pragmatic friend/foil. Boasting a widely diverse filmography (including Tsui Hark’s Double Team with Jean-Claude Van Damme and Dennis Rodman), Forde has also made several short films, such as Hong Kong 70, which seems more JCVD than Rohmeresque. 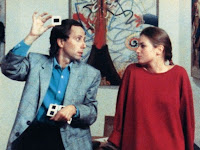 Adventures is a charming film, but it has an edge to it. Shot on 16mm, it is not exactly a visual splendor, but it still has a distinctive grace. Witty and tellingly honest, it is a very fine outing from a filmmaker whose credits include several masterworks. Easily recommended for the long Thanksgiving weekend, it runs at Film Forum through Tuesday (11/29).
Posted by J.B. at 5:00 AM