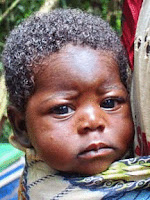 Sergey Yastzhembsky has surely seen a lot of savagery, but not in Africa. A former high ranking official in the Yeltsin and Putin governments, Yastzhembsky served as the Kremlin’s chief spokesperson during the Chechen “Troubles.” Since then, he has preferred the company of Africa’s indigenous tribes, capturing their traditional ways of life, perhaps for posterity, in Africa, Blood & Beauty, which screens this Sunday as part of the 2011 African Diaspora Film Festival.

Implying an unmistakable hierarchy, Beauty is organized into four sections, explaining the rituals and customs pertaining to children, women, men, and spirits, in that order. It quickly becomes clear spirits might be duly venerated, but tradition favors men over women. In nearly all of the surveyed tribes, the women bear the burden of nearly all the real work, except for hunting and sometime fishing. Still, the Himba of Namibia have something of a safety valve in place, requiring a man who murders his wife to pay restitution of forty-five cows to her family, but mandating nothing from a woman killing her husband.

Indeed, Beauty is at is best when it explains the practical applications of painful looking rites, though even with a compelling explanation, those endured by children might very well distress sensitive viewers. For instance, Pygmies sharpening their children’s teeth has obvious survival applications. However, as presented in the film, the Himba ceremony of knocking out young boys’ bottom teeth makes little sense from a pragmatic standpoint.

Some of Beauty’s most fascinating sequences document the nomadic Berbers of Morocco, whose customs evidently sometimes contradict their Islamic faith. Brides are still tattooed as part of their traditional wedding festivities, despite the Koran’s injunction that, as Beauty reminds viewers, unequivocally states: “any part of the body which is tattooed will burn in Hell.” Indeed, the Berbers apparently often depart from the style of observance practiced by their more radical co-religionists, particularly with regards to women. For instance, though completely veiled during the ceremony, married Berber women are henceforth forbidden to cover their faces.

Featuring a diverse but rhythmically propulsive soundtrack of traditional music and the soothing, lucid English narration by French actor Lambert Wilson, Beauty is quite a pleasant film to listen to. Yastzhembsky’s strategy of juggling the various peoples thematically also works rather nicely (with some credit due to editor Kirill Sakharnov, as well). However, his field of vision is relatively narrow. Not a film for I-max screens or 3-D, he passes up shots of striking vistas and spectacular dances, preferring a personal perspective on their lives and mores.

Beauty is surprisingly effective challenging stereotypes about the traditional tribes of Africa. It is also clearly an advocacy film, designed to alarm the audience with their dwindling numbers. Most endangered are the Bushmen of the Kalahari, whose population is estimated to be less than four hundred. Whether Yastzhembsky is rallying to their cause in hopes of finding redemption, only he knows in his heart. Regardless, Beauty is an educational and respectful film, well worth checking out during the 2011 ADIFF, especially for students of African culture, this Sunday (11/27) at Symphony Space.
Posted by J.B. at 3:00 AM