Bow Down to Daimajin 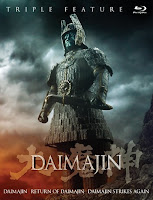 Technically, he is a god not a monster.  Regardless, it is a very bad idea to provoke him.  Every kid ought to be dressing up as the giant (majin) deity this Halloween.  He also makes a perfect stocking stuffer now that all three Daimajin features have been released together as the Daimajin Triple Feature collection (trailer here), now available on Blu-Ray at online retailers everywhere.

Combining the Jidaigeki historical genre with the big lumbering Kaiju monster movie, the storied Daiei Japanese studio released three Daimajin films in 1966.  The concept essentially adapted ancient archetypes of the Waste Land suffering from despotic rule for the Godzilla age.  Indeed, the serious tenor is established right from the start of Kimiyoshi Yasuda’s series launching Daimajin.
Lord Hanabusa’s serfs live secure in the knowledge they are protected from a fierce majin by the idol of their god, holding him trapped under the mountain.  He is about to get really hacked off though.  The humane Hanabusa has been overthrown by his ruthless chamberlain Samanosuke, who orders the murder of the entire Hanabusa clan.  However, loyal family retainer Kogenta spirits Hanabusa’s young son and daughter off to the monster’s mountain, where they live in relative peace under the shadow of the Daimajin statue.  Eventually, Kogenta and the Hanabusa heir are captured.  Intending to permanently demoralize the restive villagers, Samanosuke’s men then set out to destroy the mountain idol.  Okay, good luck with that plan.

In Kenji Misumi’s Return of Daimajin, the second and perhaps best of the series, Daimajin now resides on a quite picturesque island in Lake Yakumo, where the neighboring Chigusa and Nagoshi clans pay proper reverence.  Coveting the fruits of their industry, the tyrannical Lord Danjo Mikoshiba launches a sneak attack during a joint Chigusa-Nagoshi festival, occupying the land around Yakumo.  Lord Nagoshi is murdered, but his son Katsushige escapes, taking refuge on the majin’s island.  It is here that Sayuri, his Chingusa fiancée, prays for their salvation.

Of course, Mikoshiba tries to show everyone by blowing up the island idol.  Soon thereafter, the skies darken and lightning flashes, prompting some rather nervous comments about how abruptly the weather around these parts can change.  Featuring well crafted sets, appealing backdrops, and a shockingly strong cast (led by Shiho Fujimura as Lady Sayuri) Return would probably be nearly as satisfying as a straight historical drama without the monster bits.

With each clocking in under the eighty minute mark, the Daimajin films are formulaic and addictive as popcorn.  The third departs the most from the template, which might be why it became the franchise finale (sadly there would be no I Told You Not to Mock Daimajin, but everyone’s favorite angry majin was rebooted on Japanese television in 2010).  For his third go-round in Kazuo Mori’s Daimajin Strikes Again (a.k.a. Wrath of Daimajin), Daimajin has returned to the mountains and he now has a winged familiar.  Through the hawk’s eyes, Daimjin follows four poor youngsters as they make the arduous journey over his mountain in hopes of rescuing their logger fathers and brothers from an evil warlord.  While the boys give the first half of the film a distinctly adolescent character, it proceeds on a rather bittersweet course that might be too emotionally challenging for similarly aged viewers.

Of the consistencies between all three films, the most important is the late third act coming of the guest of honor, Daimajin.  Building viewer anticipation, the usurpers and warlords he crushes have truly been asking for it when he finally shows himself.  Unlike other Japanese monster movies, we can enjoy his rampages with a clear conscience, because they are all about retribution.  It is a sight to behold when the stone idol rouses itself to action.  Although Daimajin seems to have some undefined telekinetic powers, his weapon of choice is the slow bone-crushing stomp.

Certainly the special effects rendering Daimajin’s destructive force were the product of their time, but they hold up pretty well, all things considered.  Daiei definitely assigned some of their better period designers to the franchise, because the trappings are first rate.  It all looks great on Blu-Ray, thanks to a nice transfer.

More than a cut above standard issue creature features, the Daimajin films earnestly and rather compellingly address themes of faith and sacrifice.  Bad guys also get flattened, which is kind of awesome.  Enormous fun for connoisseurs of both Jidaigeki and Kaiju films, the Daimajin Triple Feature is enthusiastically recommended to skeptical viewers beyond the cult fan base.  Just in time for Christmas, it is now available on Blu-Ray from Mill Creek Entertainment.
Posted by J.B. at 7:00 AM