Those of us of roughly a certain generation, fondly remember the Captains we came to know and love through kid’s programming, you know, like Captain Kangaroo, Captain America, Captain Crunch, and Captain Morgan.  Captain Cornelius Cartoon follows in the tradition of them all.  He and the crew of the Manta Ray salvage public domain cartoons from the watery graveyard of the Cartoon Lagoon, in order to riff on them MST3K style.  The resulting blend of puppetry and retro nostalgia trips makes Captain Cornelius Cartoon’s Cartoon Lagoon (trailer here), the animated standout of the 2012 New York Television Festival’s Independent Pilot Competition.

The title is a little confusing, but this is indeed animated.  Maybe they should have worked in the word cartoon a few more times.  Regardless, the potential of creator Manny Galán’s concept is hard to miss.  The biggest surprise is how cartoons from established franchises such as Popeye and Caspar the Friendly Ghost could fall into PD.  There is no way you will ever see Mickey in the Lagoon.  Yet, the clear highlight of the Lagoon pilot was an episode of the long forgotten mid 1970’s Undersea Adventures of Captain Nemo (another Captain) that bears absolutely no resemblance to Jules Verne.

The Me Generation Nemo is a blow-dried, jutting jawed male model who accidentally runs over a dolphin, permanently scarring his two juvenile companions for life.  To nurse the dolphin back to health, Nemo puts it in a steel cage, while giving loud dramatic readings from Fifty Shades of Grey to scare away the sharks.  Or something like that.  Obviously, Nemo’s narrative development is a bit sketchy, making it a perfect foil for the Manta Ray crew. 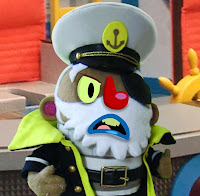 The Lagoon creators readily acknowledge their debt of inspiration to MST3K, following the same format, right down to the portal door through which the cartoon goodness enters.  It really works though, because the creative team has the right pop culture sensibility.  Lagoon delivers laughs from start to finish, sprinkling a number of truly memorable quips throughout the pilot.  The old school miniature puppetry bringing to life the Manta Ray crew also appealingly resembles a slightly rum-soused Rankin/Bass special.

It is easy to see how a cable network could pick up Lagoon with confidence.  That is not so true for the rest of the animated competition this year.  Nathan Floody’s corporate head-hunting send-up Hunters is also wickedly cutting at times, but its raunchier inclinations might make it harder to place.  However, the Captain pilot is never inappropriate for younger viewers, even though many jokes are aimed above their heads.  Nicely executed and consistently funny, Captain Cornelius Cartoon’s Cartoon Lagoon ought to have a long life ahead of it, following its well received screenings at the 2012 NYTVF.
Posted by J.B. at 6:00 AM