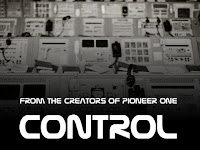 When we think of space, we think of lofty ideals, passed on down to us from JFK and Star Trek.  However, an oppressive belligerent power will act the same up there as they do down here.  Indeed, China’s saber-rattling off the coast of Taiwan will bedevil an American manned space mission in Josh Bernard & Bracey Smith’s Control (trailer here), which screens as part of the 2012 New York Television Festival’s Independent Pilot Competition (IPC).

The NYTVF is the only meaningful festival of its kind showcasing independent talent looking to break into episodic television, in the same way scores of film festivals act as launching pads for indie films in search of theatrical distribution.  There are real development deals to be won at this year’s festival.  The dollar figures may not be much by studio standards, but they would constitute a significant step up compared to the budgets of many competing pilots.  In the drama category, Smith & Bernard’s Control may well be the pilot to beat, which is not all surprising, considering their Pioneer One won the drama competition two years ago.

The American and Chinese navies are engaged in a war of nerves in the South China Sea.  Simultaneously, an American spacecraft is racing to beat their Chinese rivals to a resource rich asteroid.  Long in development, the American mission continued, even when China precipitously laid claim to the asteroid, in open defiance of international law.  Apparently a quasi-private enterprise conducted with official government sanction, the mission obviously just became a whole lot more complicated.

The flight director isn’t helping much either.  Not only did he call the president a feckless ditherer on national television (but in more colorful terms), he is also carrying on a not so secret affair with the chief medical officer, who happens to be married to the flight captain.

Of all the genre-related pilots screening in the Drama 1 programming block, Control is by far the one that leaves audiences most eager to see more.  Shrewdly, Bernard & Smith end on a monster cliffhanger that cannot possibly be as bad as it seems.  Though the flight director resents the U.S. Military’s secret involvement in the mission, he might be happy to have them around when it is all said and done.  Based on the pilot, Control has the potential to become a cool submarine-warfare in space story, much like the classic Romulan episodes on the original Trek.

The tone of Control is sort of like a cross between Apollo 13 and Ben Bova’s geopolitical sci-fi thriller novels.  To their credit, Smith & Bernard do not appear to have many naïve notions with respects to the current (and presumably near future) Chinese Communist regime.  It also looks reasonably realistic, thanks to the control room full of computers bought on the cheap due to a tech firm’s bankruptcy (finally, the stimulus plan delivers).

Perhaps most importantly, despite all the intrigue and political infighting, it looks like it will still tap into the warm fuzzy feelings many viewers get when they think about the Space Program, particularly in its Apollo-era heyday.   Showing loads of potential, Control is definitely worth seeing when it screens again this Friday (10/26) as part of the 2012 NYTVF’s IPC Drama 1 program at the Tribeca Cinemas.
Posted by J.B. at 10:00 AM